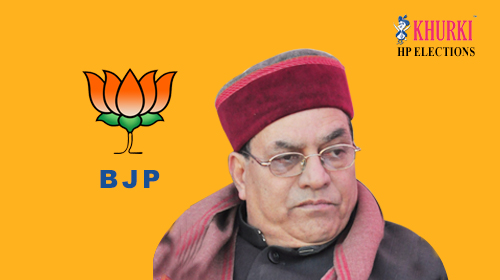 Suresh Bhardwaj is the Shimla MLA. He is associated with Bharatiya Janata Party. He is son of late Shri Shardha Nand. He was born on March 15 1952 at Shimla. He is B.Sc., LL.B; educated at Govt. Higher Secondary School, Ghumarwin, D.A.V. College, Jalandhar, S.D.B. College, Shimla and Himachal Pradesh University, Shimla.

Shimla also known as Simla, is the capital city of Himachal Pradesh. Shimla is bound by Mandi and Kullu, Kinnaur, state of Uttarakhand and Solan and Sirmaur districts. The city has a rich history, as in 1864, Shimla was declared as the summer capital of British India, succeeding Murree, northeast of Rawalpindi. After Independence, the city became the capital of Punjab and since 1966 it has been the state capital.

The colonial architecture and churches, the temples and the natural beauty of the city attract large number of tourists making Shimla one of the most sought-after tourist locations in the country. The major attractions include the Viceroy Lodge, the Christ Church, the Jakhoo Temple, the Mall Road and The Ridge which together form the city center. The Kalka-Shimla Railway line built by the British, now a UNESCO World Heritage Site is also a big attraction for tourists from all across the world. Shimla also has the largest natural ice skating rink in South Asia.

Arrest of police officials had shattered the trust of people: Thakur

Shimla, Sep 1: Hamirpur MP Anurag Thakur alleged gross negligence on part of the government and the police in investigation the Kotkhai rape and...
Read more
Himachal

Rampur MLA Nand Lal Of Congress Profile Nand Lal is the Rampur MLA. He is associated with Indian National Congress. He is son of late Shri...
Read more
Himachal

No funds received for 68 NHs from Centre: Govt

Shimla, June 22: The state government yesterday trashed the statements by Opposition leaders in a section of media stating that the Union Ministry of...
Read more
Load more
KHURKI

We All Have That Phenku Friend. Right?

Stop it now...Buzz off!!
Read more