Himachal Pradesh Assembly polls to be held on November 9 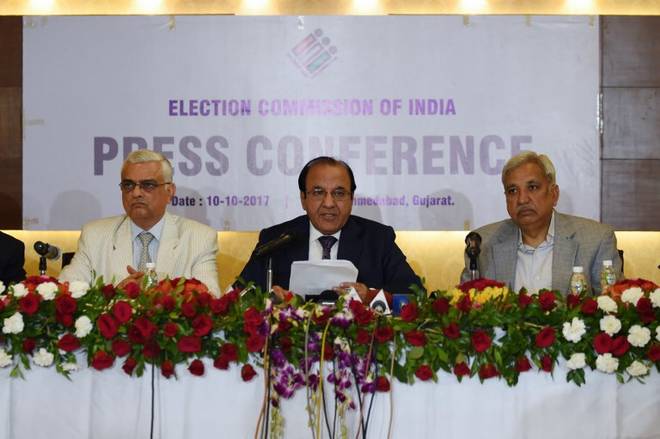 Shimla, Oct 12: Assembly elections in Himachal Pradesh will be held on November 9, the Election Commission of India (ECI) announced in New Delhi on Thursday. It said counting of votes would be held on December 18. The model code of conduct comes into effect immediately.

While speculations were rife that the ECI may announces dates for Gujarat Assembly polls also, Mr. Jyoti said the elections to the western State would be held later.

“Gujarat poll schedules are not announced right now due to the existing rules on time limit [46 days] for holding elections, but it will take place before December 18, to ensure that Himachal Pradesh election results do not impact the Gujarat elections,” he said.

An estimated 49.05 lakh people, including over 20,000 new voters, will exercise their franchise in 7,521 polling stations in Himachal Pradesh.

Voter assistance booths would be set up and 200 wheel chairs have been arranged by the State government. There would be 136 women managed poll stations this time, he said.

The ceiling on election expenditure a candidate is Rs. 25 lakh. The ECI, for the first time, would use RONet, an integrated application, for conducting the elections. It was first implemented on a pilot basis in the Ludhiana Assembly election in February last.

Service voters would be given the option of getting one-way online voting system, wherein they would be sent the encrypted ballot paper and its decryption key separately. They should send the filled ballot through post, Mr. Joti said.

The term of the 68-member Himachal Pradesh Assembly comes to an end on January 7, 2018.

While the BJP is yet to announce its chief ministerial candidate, the Congress has announced Chief Minister Virbhadra Singh as its nominee.

Date of Notification of election: October 13, 2017

Shimla, June 13: Lahaul-Spiti will be developed as tourist destination and it will provide job opportunities to people, said Union Minister of State for...
Read more
Elections

Shimla, Sep 7: A two-member team of the Election Commission on Wednesday arrived in Shimla to review the preparations for the state Assembly polls...
Read more
Himachal

Shimla, July 28: The Ministry of Environment and Forests (MoEF) has exempted two cement plants lying in the Darlaghat area from being included in...
Read more
Load more
KHURKI

So, which is the most powerful sex organ? ROTFL! It's not what you are thinking! 1. As a child, Beyonce charged her parents' house guests $5...
Read more
Blogs

Get up and dance.
Read more