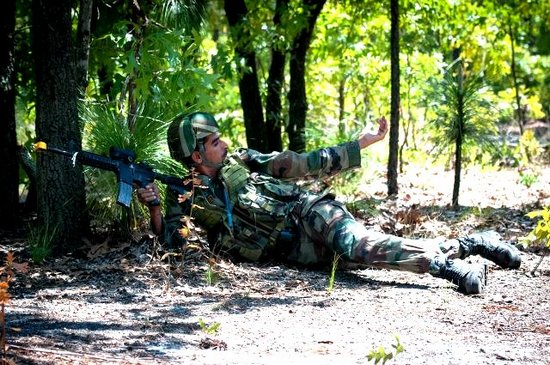 Troops of Indian and Oman armies today commenced their 14-day joint exercise “Al-Nagah-II 2017” in Bakloh belt of Himachal Pradesh to strengthen the military ties between the two countries. The joint training exercise of the Indian Army and the Royal Army of Oman began with the opening ceremony at Bakloh, PRO Defence Lt Col Manish Mehta said.

“Indo-Oman joint army exercise will conclude on 19 March in the Dhauladhar Ranges at Bakloh,” he said. The training contingents comprised of platoon strength troops from both armies, Mehta said adding that senior military observers from both countries will witness the validation phase of the exercise.

The Oman Army contingent landed at the Adampur Air Base on Saturday. This is the second edition of the exercise which is in continuation of a series of joint exercises between the armies of the two countries, he said.

The first edition of the exercise was held at Muscat, Oman in 2015, Mehta said. The PRO said the aim is to acquaint both forces with each other’s operating procedures in the backdrop of counter insurgency, counter terrorism environment and also to enhance the existing military relationship between India and Oman.

The exercise will also enhance the interoperability between the two armed forces in conducting joint operations and cement the bonds of friendship between the two countries, he said.

The troops have been drawn from one infantry battalion each from the two armies, Mehta said. Approximately sixty troops from both countries will participate in the exercise, he said.

The Indian troops have undergone extensive training on rock craft, slithering, counter terrorism or low intensity conflict operations, in addition to tactical drills of close cordon and house intervention drills to fulfil the mandate of the joint exercise, he added.

“The fourteen-day exercise with the Royal Army of Oman is scheduled to be conducted in multiple modules in order to achieve complete integration between the two contingents at every stage,” Mehta said.

The PRO said that the vast experience and expertise gained by the Indian troops in counter insurgency operations holds special importance to the Oman Army.

Conduct of the joint exercise would therefore set the stage for greater defence cooperation between the two nations, he said.

50 Students Down With ‘Food Poisoning’ Hospitalised In Shimla

Your health is in your hands! Indeed that is true. Hard for you to believe? But trust me that for time immemorial our good health...
Read more
Blogs