Widespread destruction caused by rain and storm in Solan district 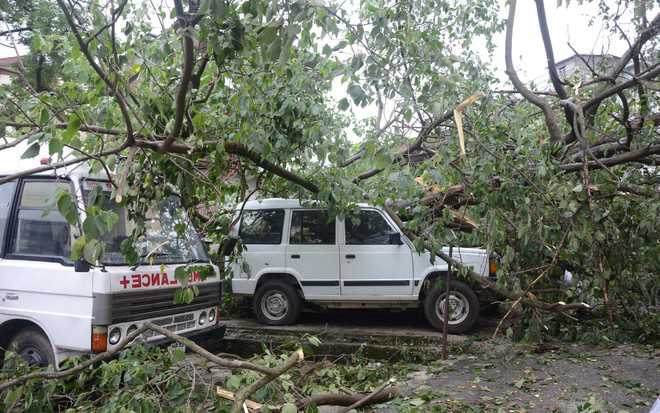 Shimla, June 8: The power supply remained paralysed in various parts of the district, including Ramshehar, Mamlig, Jogo, Dharampur, Chail and Kasauli since last evening following high velocity winds and rain which swept the area and caused a lot of destruction.

Superintending Engineer (SE), HP State Electricity Board Limited, Dheeraj Mittal, said 100 electricity poles had been uprooted with 40 trees having fallen on power lines at various places in the district. He said the power infrastructure had been adversely hit owing to the inclement weather.

Hoteliers in Chail were among the worst affected as being the peak tourist season, the lack of power made them switch over to generator sets which cost them dearly.

Devinder Verma, a hotelier, said they had to shell out nearly Rs 1 lakh last month only on diesel for operating gensets as power situation had worsened.

The SE said the field staff were restoring the power supply and loss worth nearly Rs 25 lakh had been assessed as per preliminary estimates in the district.

As far as hill getaways are concerned, Dharamshala is on the been-there-done-that list of just about anyone. But then that is for the average...
Read more
Featured

Himachal Pradesh: No supply of goods, traders left in lurch

Shimla, July 10: Implementation of the Goods and Services Tax (GST) from July 1 has left the traders across the state in the lurch...
Read more
Himachal

Shimla, Sep 11: Taking steps in the wake of recent incident in which a child was murdered in the school toilet in Ryan International...
Read more
Himachal

Shimla, Aug 6: An RTI enquiry has revealed that static load may damage the bridge on the Yamuna at Paonta Sahib. The application filed...
Read more
Load more
KHURKI