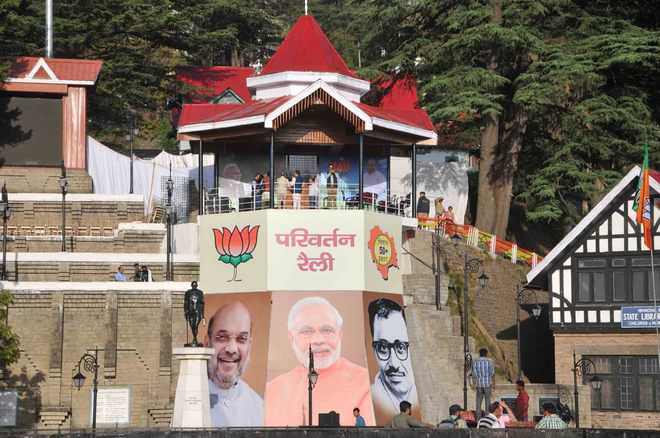 Shimla April, 27: As BJP leaders and workers slogged hard to give an impressive show at Prime Minister Narendra Modi rally, the Congress today demanded that he must announce a special financial package for the hill state and give nod for some pending railway projects, including the Manali-Leh rail line.

Congress president Sukhwinder Singh Sukhu said the people, who had ensured the victory of the BJP in all four Lok Sabha seats, were pinning their hopes on Modi. “The kind of mandate that the people gave to the BJP in the last elections it is but natural for people to expect some big announcements,” he remarked.

Sukhu said the Prime Minister Modi must announce grants for the pending Pathankot-Manali-Leh rail line as it was important not just from the defence point of view but would help boost industry and tourism. “The promises that the PM had made while he campaigned in Himachal must be fulfilled and this includes enhancement of import duty to protect Himachali apples from stiff competition,” he remarked.He said the people belonging to the Hatti community from the Trans Giri area in Sirmour were awaiting granting of ST status to the area as this would help them keep pace socially and economically with other parts of the state.

The Congress chief, while stating that the people of Himachal would love to have the PM amidst them, pointed out that the flights are only being resumed and not inaugurated. “This cannot be termed as inauguration of flights as the Jubbarhatti airport has always had flights except for the last over four years,” he remarked putting the record right.

Shimla, Aug 26: Heavy rain triggered landslides on the Parwanoo-Dharampur stretch of the national highway on friday with debris also falling on the railway...
Read more
Himachal

Shimla, July 24:  A team of the CBI started investigation in the twin cases of rape and murder of a minor girl in Kotkhai...
Read more
Himachal

Houses along rail line to be razed

Shimla, July 20: Public outrage has forced the Himachal Pradesh government to act against the officials involved in the investigation of the Kotkhai gang rape...
Read more
Himachal

From the Bengali Babu Bhaskor Banerjee in Piku to Omkar Nath Dhar in Wazir, Amitabh Bachchan sure seems to be experimenting with his looks. Wazir,...
Read more
Blogs

There could be no valid reason for using fake ids on social network. Point # 8 is SICK!
Read more