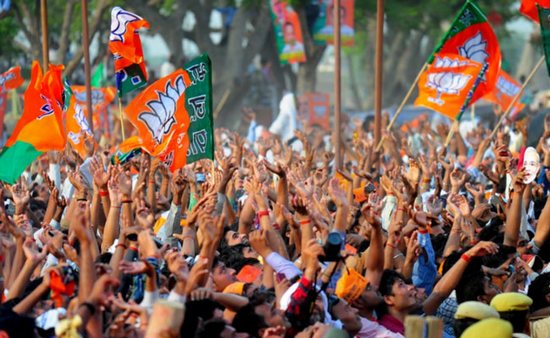 Shimla April, 27: Even as Madhu Sood, a former Mayor of the Shimla Municipal Corporation, and two former councillors, joined the BJP, speculation was rife about some other Congress leaders, including MLAs, deserting the party.

Though the top brass of the state BJP leadership has been claiming that some Congress legislators are keen to join the party, speculation is mounting that two senior ministers in the Virbahdra regime and one Chief Parliamentary Secretary have met BJP national president Amit Shah.

The speculation in political circles again gained ground as some Congress leaders from Shimla and Sunni joined the BJP. Although, Madhu Sood, a former Mayor of the Shimla MC had fared very badly in the last MC polls where she secured the third position in the direct election to the post of Mayor, after the CPM and BJP candidates, the BJP is terming this the beginning of the exodus from the Congress sinking ship.

Two former MC Councillors — Sanjay Sharma and Kanwaljeet Singh — and Sunni Zila Parishad Member Girdhari Lal also joined the BJP today.“There is no question of any Congress ministers or MLAs joining the BJP. This is simply a propaganda strategy to create an impression that they are on the upswing,” remarked Sukhwinder Singh Sukhu, Himachal Pradesh Congress Committee president.

Even as top brass of the BJP, including former Chief Minister PK Dhumal, state BJP president Satpal Singh Satti and local MLA Suresh Bhardwaj, remained engaged in ensuring the success of the Modi rally, scheduled to be held on the Ridge tomorrow, Chief Minister Virbhadra Singh spent the day inaugurating some of the completed projects and laying foundation stones of some new projects in the capital city.

The same routine was followed by the Mayor and Deputy Mayor of the CPM with an eye on the elections of the Shimla Municipal Corporation elections due next month. The elections to the Shimla MC is being viewed with keen interest as they could be a precursor to the finale, the Assembly polls a little over six months away. Moreover, the Congress has always maintained their hold over the prestigious Shimla MC polls and retaining its hold on the local body would be imperative for the ruling party.

For the BJP it is a complete desperation situation, where they wouldn’t want anything going wrong for them, as the party is on all time high across the country.A convincing win in the Shimla MC will consolidate the party’s position as the party is hoping to wrest power from the Congress in Himachal.

SHIMLA, March 15:  As many as 27 out of 63 officers having doubtful integrity in various government departments in Himachal Pradesh are holding sensitive...
Read more
Himachal

No law followed in construction of some Kasauli hotels: SC

Shimla, June 29: No law has been followed in the construction of some resorts and hotels in the picturesque town of Kasauli in Himachal...
Read more
Elections

Shimla May, 5: CM Virbhadra Singh said politics had stooped to a new low nowadays. He said he knew the pulse of each and...
Read more
Load more
KHURKI

"1-2, Buckle My Shoe". Well, West Bengal Minister Rashpal Singh still seems to be humming this rhyme from his kindergarten days! As, not only did...
Read more