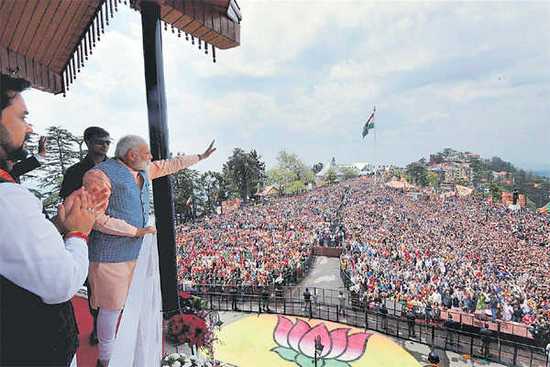 Shimla April, 28: Modi mania virtually gripped the Queen of Hills as Prime Minister Narendra Modi, who has had a close association with Himachal, sought the cooperation of the people in his fight against corruption so as to provide the common man what had been denied to him in the last 70 years.

Addressing a well-attended rally on The Ridge here, Modi said it was after a lapse of 20 years that he had had the privilege to address the people of Dev Bhoomi, which was now known as Veer Bhoomi, due to the sacrifices made by its valiant soldiers. He added that it was two decades back that as the national BJP general secretary and in-charge of Himachal, he had attended a rally addressed by Prime Minister Atal Bihari Vajpayee.

Despite intermittent spells of rain, the weather cleared up when Modi arrived to address the rally. He said no doubt India was fast emerging as a power to reckon with on the global map, but he wanted to usher in a golden era where honesty is respected and the honest valued. “Your Chief Minister is the only head of the state in India who spends the maximum time with lawyers,” he said in an oblique reference to CM Virbhadra Singh, without naming him. He then asked the people if they understood who he was referring to, with the crowds responding with a thunderous applause and affirmative sloganeering against corruption.

He exhorted people of Himachal to let the winds of change that had swept UP, Uttarakhand and Delhi to blow in Himachal. “The youth and people of other parts of the country have joined me in this fight against corruption and here I seek your cooperation,” he remarked. He said those who had looted the poor and the country would have to repay every penny and he would not rest till this would not happen.“I urge the people of Himachal to join me in my fight against corruption and I guarantee that if you vote us to power here, you will see the difference,” he said. He said many people were vehemently opposed to him because of demonetisation and he would require public support.

He remarked that he had experienced poverty in his childhood. “My dream is to provide to the poor what only the rich and the privileged have experienced so far. Hawai Chappal wala bhi hawai safar kar sake, yeh meri tamanna thi,” he said. He added that there was immense potential for tourism in Himachal as this would not only help boost economy but also provide the much-needed employment.

Modi said the PM Crop Insurance Scheme had been launched to protect the farmers against vagaries of nature. “Coca-Cola and Pepsi have agreed to our demand to ensure that there is 5 per cent fresh orange concentrate in their drinks to benefit the growers of Nagpur and I promise a similar arrangement will be worked out for fruit growers of HP,” he announced. He added that his regime had ensured that 800 generic medicines were made available to the common man and the cost of stents reduced from Rs 40,000 to a mere Rs 6,000.

He said it was his endeavour to provide LPG gas to five crore homes in five years and within the last 11 months, a target of 1.50 crore had been achieved. “After becoming the Prime Minister, I took up the long pending demand of one rank-one pension and ensured that Rs 15,500 crore is given in four instalments,” he said. The PM Mudra Yojna had been launched to help the youth get soft loans and 3.50 crore persons had already benefited.

Shimla, Sep 25: A mild quake was recorded on Sunday in Himachal Pradesh's Chamba region, which witnessed tremors for three consecutive days in May, an official said. "An...
Read more
Himachal

Gagret MLA Rakesh Kalia Of Congress Profile Rakesh Kalia is the Gagret MLA. He is associated with Indian National Congress. He is the son of Shri...
Read more
Elections

Shimla, July 3: Despite orders of the state High Court to the local administration, little has been done for the safety and security of...
Read more
Load more
KHURKI

Having a bad day is okay as long as it is not as bad as these people. Though it is never wise laughing at...
Read more
Blogs