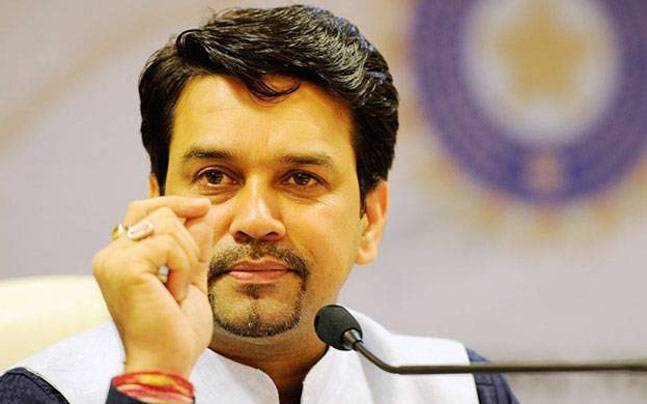 Shimla April, 28: BJP leader Anurag Thakur has claimed that the BJP will win 60 of 68 seats in Himachal Pradesh Assembly. Interestingly, the BJP has aimed at securing 50 seats in the Assembly poll slated later this year.

Doing last minute check of the bandobastÂ  at the PM rally in Ridge area in Shimla, BJP MP Anurag Thakur looked extremely thrilled at the response from the crowd.Â

Calling the visit by Prime Minister Narendra Modi to Shimla a historic occasion, Anurag Thakur said that going by the response he had seen in last 24 hours, he was confident that by the time Himachal Pradesh went to poll in six months,Â  the BJP would better its aim of winning 50 seats. The BJP will win around 60 seats, Anurag Thakur said.

Hailing PM Narendra Modi as the most popular leader of India, Anurag Thakur said that in the last three years the NDA government has given so much to Himachal Pradesh what no other central government could provide in the last 60 years. Listing the gains for Himachal Pradesh, Anurag Thakur said national Highway, several four-lane projects, rail project, and institution like AIIMS, IIM and now today a flight dedicated to Shimla reflect the vision of the Prime Minister. All these things clearly show his attachment to the state and also his development agenda, Anurag Thakur said.

Talking about the association of Narendra Modi with Himachal Pradesh, Thakur said the Prime Minister knows every nook and corner of this state as he was in charge of this place for a long time. Reacting to allegation levelled by the Congress that PM Modi has given nothing to Himachal Pradesh in three years, Anurag Thakur said that the Congress is right in a way that Modi government gave everything to Himachal but the local government failed to implement it. “AIIMS has been given three years back. IIM has been given three years back. But, all that could not be implemented on the ground. If the state government does not give land or NoC (no-objection certificate) what will Modi government do,” Anurag Thakur asked.

Hitting at Himachal Pradesh Chief Minister Virbhadra Singh, Anurag Thakur said that if a state headed by a person, who is busy handling his own cases and doing “pooja path” then what can you expect from this government. Anurag Thakur also said people are openly speaking against the CM. “There was a bus accident here but despite hailing from this part of state he did not visit any grieving family,” Thakur said

Shimla April, 6; Making his electoral debut after the demise of his father ID Dhiman, a BJP stalwart who represented Bhoranj for six consecutive...
Read more
Himachal

Shimla, June 7: All 154 nominations filed by candidates in 34 wards of the Shimla Municipal Corporation elections were scrutinised on Tuesday and found to...
Read more
Himachal

Shimla, Aug 11: In a measure aimed at inculcating more discipline amongst the teaching fraternity, the government higher education department has issued directions to...
Read more
Himachal

These Friends Vs Best Friends Graphics You Will Relate With!

The reasons for being best friends with somebody is still a mystery. It is very difficult for you to explain the reason why your best friend...
Read more
Bollywood

Waever..talk to my hand!
Read more