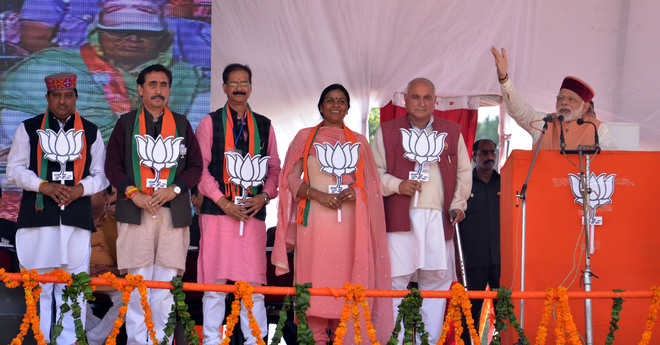 Palampur, Nov 6: Prime Minister Narendra Modi said the Congress was planning to burn his effigies in the entire country on November 8. He stated this while addressing his third rally here today.He said the Congress was rattled due to the demonetisation. “Those who had stacks of money lying in their houses have been forced to deposit it in banks. They are now accountable for it and this is troubling them,” Modi said.

“I am not afraid of my effigies being burnt by Congress leaders. I have the support of the common man,” he said.He said the Congress was perturbed after the BJP was given massive mandate by the people in UP even after demonetisation. The subsidised urea that was meant for farmers was used in the chemical industry and the successive Congress governments turned a blind eye to it.

The farmers were always short of fertilisers due to it, he claimed. “Now, we have checked the pilferage of urea and the government has additional stocks of fertilisers,” Modi said. Hitting out at the Congress government in Himachal, he said even after 70 years of Independence, 14,000 families were still without power connections. “The Union Government has launched a scheme under which all cost of providing electricity connections will be borne by it,” he said.

The PM also announced that his government was working on a scheme under which every citizen would have his own house by 2022. He claimed that the BJP CMs in Himachal, Shanta Kumar and Prem Kumar Dhumal, were known for development of drinking water schemes and roads, respectively, however, the Congress CM was known for corruption cases against him. He urged women to surpass men in voting for the Assembly elections.

The Prime Minister introduced BJP candidates Indu Goswami from Palampur, Vipin Parmar from Sulah, Mulkh Raj Premi from Baijnath, Thakur Gulab Singh from Jogindernagar and Ravinder Dhiman from Jaisinghpur to people present at the rally.Shanta Kumar and Union Minister for Social Security Thawar Chand Gehlot were among other senior party leaders present at the rally.

The Himachal Pradesh government is prepared to cope up with the tourist rush in tribal Lahaul and Spiti districts after opening of Rohtang tunnel,...
Read more
Himachal

The BJP on Tuesday took out its first rally from Bilaspur here as part of its programme to save the State from ‘mafia rule’....
Read more
Himachal

Mandi, Oct 27: An earthquake measuring 4.4 on the Richter scale was recorded in the Mandi region of Himachal Pradesh on Friday, an official...
Read more
Load more
KHURKI

Just when you thought Priyanka was crooning her heart out in the title track of upcoming movie Dil Dhadakne Do comes another rocking party...
Read more
Videos

When you turn every single child to be prepared to cram, learn and excel almost everything you teach them, that's exactly when talent is...
Read more