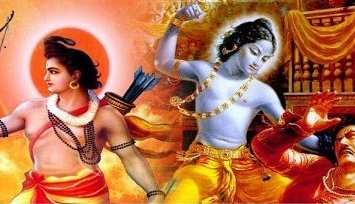 The duo are the most referred epics in Indian mythology. Ramayan & Mahabharat come with various versions and there has always been curiosity about the relation between the two legendary scriptures. Are there any ways in which the two could be related to each other? Or what was Hanuman ji up to during the Mahabharat era.

Also Read: Get To Know Hinduism, Because Every Hindu Is Not A Fanatic…

There have been common characters, avatars and sons and daughters related with one another. We have listed out a few things which were found common in Mahabharat & Ramayan.

Yudhishtir \was told the tale of Ramayan after losing the gamble to instil confidence in the dejected king.

Parashuram, who taught Ram and Laxman, was also Karna’s Guru. He cursed Karna when he found that he lied about being a Brahmin.

Lord Vishnu was the elder brother as Ram and Adishesh was younger as Lakshman.

In the next birth, Lord Vishnu was younger as Krishna and Adishesh was elder as Balaram.

Vibhishan, brother of Ravan, attended the Rajasooya Yagna hosted by Yudhishtir at Indraprastha.

This famous incident about Bheem and Hanuman…

In Mahabharat, Draupadi asks Bheem to get a flower whose scent was the sweetest. Bheem agrees and starts looking for such a flower. On his way, he sees a monkey’s long tail blocking his path. He asks the monkey to move out of his way, to which he asks Bheem to move it if he so wanted. So Bheem tries to lift the tail but fails. Then, Hanuman reveals his identity and blesses him.

Sunny Leone-starrer Ek Paheli Leela did a brisk business of about Rs.16 crore in the first three days of its release. According to trade analyst...
Read more
Lifestyle

Punjab has this weird obsession for Canada, or Canade as they refer to it. A Punjabi living in Canada is no less than a...
Read more
Lifestyle

At least that's what a research says!
Read more
Lifestyle

Now also known as the “selfie capital of the world”, the Philippines has an art museum that, instead of keeping you away from art...
Read more
Blogs

There can be no one like him ever!
Read more
Load more
KHURKI

Mothers are known for their 'Mamta' but what are fathers known for?Mother is one person who takes care of us when we obviously can't...
Read more