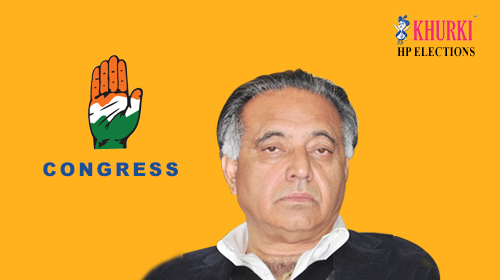 Gurmukh Singh Bali is the Member of the Legislative Assembly from Nagrota Bagwan. He is son of son of late Shri M.S. Bali. He was born on 27 July, 1954, at Kangra. He has Diploma in Mechanical Engineering. He is the Transport, Food, Civil Supplies & Consumer Affairs and Technical Education Minister in the present Himachal Pradesh Cabinet.

Gurmukh Singh Bali is the founder president of Himachal Nagrik Sudhar Sabha. He was Vice Chairman and later Chairman of the Himachal Social Bodies Federation. He was the Convener of the Indian National Congress Vichar Manch from 1990 to 1997. He was the President of the Congress Seva Dal from 1995 to 1998. He was also the Joint Secretary of the Himachal Pradesh Congress Committee from 1993 to 1998. He got elected to Himachal Pradesh Vidhan Sabha in 1998 and was re-elected in 2003, 2007 and 2012. He was appointed as the Cabinet Minister for Transport on March 6, 2003. He won by a margin of 2743 votes. Arun Kumar, an Independent, was the trailing candidate.

Shimla April, 8; Two days of unseasonal snow and rain in Himachal Pradesh have left around 70 tourists — including 34 women and 11...
Read more
Himachal

Himachal Traders on strike today over tax slabs under GST

Shimla, June 30: Even as the state government hopes to register 15 per cent increase in its tax collection from the Goods & Services...
Read more
Himachal

Shimla, Sep 20: The Shimla Police today busted a flesh trade racket by arresting three people, including the owner of a hotel, where it...
Read more
Himachal

Shimla May, 22: Inclement weather has hampered the snow-clearing work on the Manali-Leh National Highway till Sarchu Pass (14,500 feet), the border of the...
Read more
Load more
KHURKI

What Are The 21 Signs Of A Kid From A Small Town?

Even if you want, you won’t be able to hide the symptoms. Children who are born and brought up in small towns, tend to...
Read more
Bollywood

Alia Bhatt is a bundle of talent and acting and she has added a new dimension to Bollywood competition.
Read more