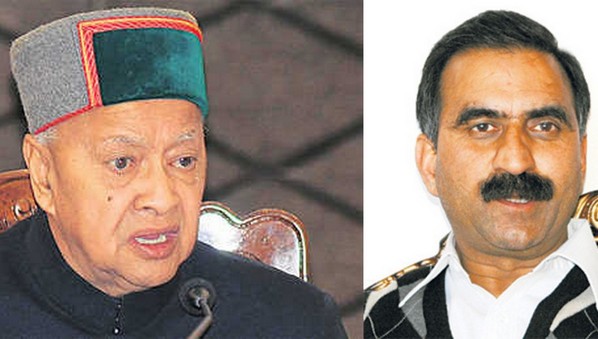 Shimla, July 11: Irked over the “silence” of the Congress organisation over the salvo fired by senior Congress leader Vijay Singh Mankotia against him, Chief Minister Virbhadra Singh targeted the Himachal Pradesh Congress Committee (HPCC) and asked, “Is there any organisation worth the name”, triggering the war of words. In an informal chat with media persons, the Chief Minister, who was visibly upset over the inaction of the party against Mankotia over his utterances after removal as the vice-chairman of Himachal Pradesh Tourism Development Board, reacted sharply when asked that whether the party would take any action against him.

“Mankotia had been changing parties. He never sticks to one party and explored new options when the elections are near,” the Chief Minister said, adding, “When Mankotia extended his hand of friendship, we reciprocated and what happened later is before everybody”.HPCC president Sukhwinder Singh Sukhu minced no words in reacting to the remarks of the Chief Minister and said, “I have been working to strengthen the organisation at the booth level and 24 MLAs, 80 per cent of state party office-bearers, District Congress and Block Congress presidents have expressed satisfaction with my functioning and I enjoy the confidence of the party and the high command”.

Having a dig at the Chief Minister, he said, “The Congress is strong in the state but the tickets for all four Lok Sabha seats and Sujanpur and Bhoranj Assembly bylections (which the party lost) were given at the behest of the Chief Minister.”Asserting that the organisational strength was gauged at the booth level and not by pulling crowds, he said the fact that barring a few leaders in Rampur and Shimla Rural Assembly constituencies, no leader had left the party which showed its strength.

When asked about action against Mankotia, he said, “Every leader should exercise restrain,” and added that the parties function on the basis of ideology and not personality cult.The face-off between the Chief Minister and the HPCC chief in the run-up to Assembly elections does not augur well for the party and in case the voices of discontent are not contained, it could lead to rebellion, said a senior Congress leader.

Shimla, Nov 2: The Congress, by promising “zero tolerance” of corruption when its own Chief Minister in Himachal Pradesh was facing allegations of graft, had become...
Read more
Himachal

Shimla May, 16: Seeking an amicable settlement of their grievances pertaining to controversial godman Amardev at Rurra village in the Kandaghat sub-division, a delegation...
Read more
Himachal

Shimla May, 22: HPCC president Sukhwinder Sukhu, not enjoying the best of relations with Chief Minister Virbhadra Singh, presented a show of strength at...
Read more
Himachal

Shimla April, 29: After the opening of the 13,050-ft-high Rohtang Pass for all vehicles today, the 474 km-long Manali-Leh highway will open to traffic...
Read more
Load more
KHURKI

Well, yes... It's we Indians, once again. Do we really think there's something wrong with our manners or we think these are just embarrassing stories people lay hands...
Read more
Blogs

Ashok Khemka. The first thing that comes to our mind when we hear this name is Honesty. Ashok Khemka in his career has been transferred...
Read more