Frequent jams in Dalhousie creating chaos in the area 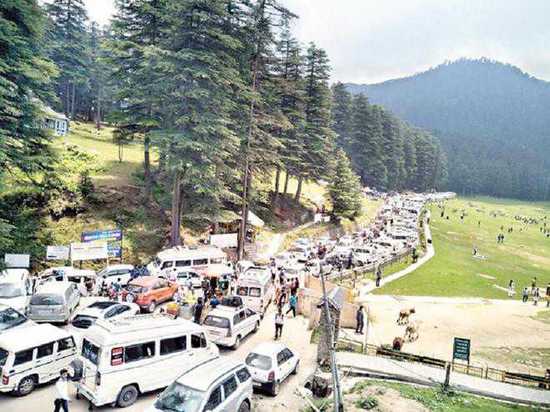 Shimla, June 27: To escape the scorching heat of the plains, a large number of tourists are thronging Dalhousie and its adjoining Khajjiar and Kalatop hill stations. But in the absence of proper parking lots, they park their vehicles in a haphazard manner on the roadside leading to frequent traffic jams.

“Though Dalhousie, Khajjiar and Kalatop receive tourists round the year, the season is at its peak during the summers and on Christmas when tourists come to witness snowfall,” said Vikas Dutta, manager, HPTDC Deodar Hotel, Khajjiar.

Tourists said the Chamba and the Dalhousie administration should focus on creating more parking spaces. They also demanded posting of adequate police personnel at all picnic spots for regulating traffic movement. The frequent traffic jams are due to the lack of parking lots, they said.

“Taking into account the increase in tourist flow to Dalhousie and Khajjiar, the district police are making efforts for the smooth regulation of traffic to avoid jams,” the police said. Chamba Deputy Commissioner Sudesh Mokhta said though the administration as well as hoteliers had created parking lots, it was not enough to cater to the heavy tourist inflow. “For this, plans are under way to create more parking lots,” he added.

Shimla, Oct 16: In a blow to the Congress ahead of the Assembly polls, Himachal Pradesh Rural Development minister Anil Sharma today quit the...
Read more
Himachal

44 Of 50 Passengers Killed As Private Bus Plunges Into River

Forty four passengers were killed on Wednesday when a private bus carrying more than 50 passengers fells into the Tons river near Chopal, 95...
Read more
Himachal

Shimla, July 17: To locate a trekker from Chandigarh who had gone missing on his way back from Shrikhand Mahadev in the Anni subdivision...
Read more
Himachal

Shimla, June 27: Commuters were left stranded for hours on the Manali-Pathankot highway this morning when the road was blocked due to a flash...
Read more
Load more
KHURKI

Every Dad Should Say This To His Daughter. Watch it! #FathersDay

A dad is ever willing to sacrifice his own comforts for the sake of his children. And, he never ever complains. Gives up all his...
Read more
Blogs

There can be no one like him ever!
Read more