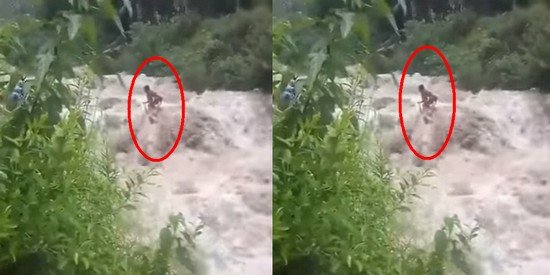 Shimla, June 30: An adventure trip would have cost dear to three tourists in Dharamshala, Himachal Pradesh, who struggled between life and death for more than an hour in river water before they were finally rescued by the locals.

The rescue video, which has gone viral on social media, shows the three youths crying for help and struggling with the muddy water currents. The shocking video was recorded by the locals who rescued the youths safely one hour after they were struck in the flooded river. The incident took place at Bhagsunag area, located at a distance of 2 kms from McLeod Ganj, Himachal Pradesh.

“Three tourists in their 20’s were crying for help. We rushed to Bhagsunag, a local waterfall popular with the tourists. We used our shirts and trousers besides a turban to rescue them. But rescuing them was made difficult by the flow of water,”  says Kamlesh Nehria, a Bhagsunag resident, who along with others safely rescued the tourists.

TOURISTS WERE HAVING LUNCH IN MIDDLE OF RIVER

According to Abhay Karki, who shot the video, the incident took place on June 27 around 12 in the afternoon, when the tourists were enjoying their lunch by sitting on rocks in the middle of river.

“The rains suddenly flooded the river and these youths were struck in the middle. The muddy water made the scene horrible,” added Karki.

However, the tourists were finally rescued by the locals.

The incident reminded the locals of Beas river tragedy of 2014, in which 24 Hyderabad students were washed away. The local administration and the tourists seem to have learned no lessons from the incident and continue to put their lives in danger by venturing into dangerous water.

Power Crisis in North as 4 Projects on Sutlej Shuts Down

Shimla, June 13: Government college teachers are up in arms against the Deputy Commissioner (DC), Shimla, for his alleged misbehaviour with an associate professor....
Read more
Himachal

Shimla, July 11: The helicopter, in which Yogi Adityanath was to fly back, on Monday developed a snag. The helicopter was parked in a...
Read more
Himachal

Shimla, Aug 4: One person died and six were injured when a building collapsed at Theog 30 kilometer from the state capital of Shimla...
Read more
Himachal

Dharamshala, Sep 6: After the Congress, the BJP will make all-out efforts to attract the youth. The party has planned a rally in Kangra...
Read more
Load more
KHURKI

There were times when we had infinite memory, but sad to admit that we are limited to gigabytes. And having 128 or 256 GB...
Read more
Flicks

That adjective in the title is so accurate. Mad Max: Fury Road is a violent film, but the violent acts in this world don’t feel...
Read more