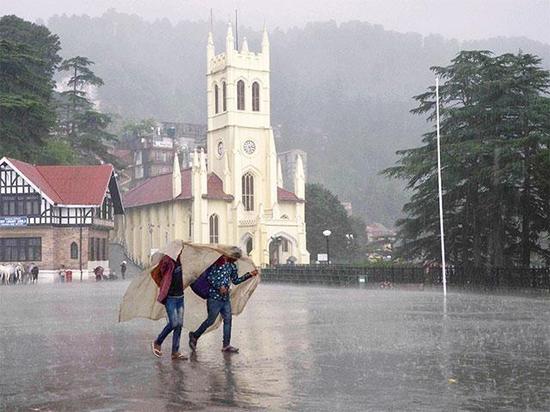 Shimla May, 19: A thunder squall followed by heavy rain lashed Shimla and surrounding areas this afternoon disrupting normal life.  And also mild snow in the tribal areas around rohtang pass. Shimla received 25 mm rain in one hour while Solan received 18 mm rain. Dark clouds and fog reduced visibility to a few meters hampering vehicular traffic. There was darkness at noon and vehicles moved at slow pace with headlights on.

Long queues of vehicles caused traffic jams at several places causing inconvenience to people. The heavy rain caused landslides at a few places while some trees were uprooted in suburban areas.

Shimla, July 7: The MBBS classes in Pandit Jawaharlal Nehru Government Medical College (PJNGMC) will begin from this session and the land for the...
Read more
Himachal

Shimla, Sep 27: For a state that is the third in the country to start a Rs 1,000 per month social security pensions for...
Read more
Himachal

BJP Closed Campaign With Its Vision Document For SMC

Shimla, May 30: Himachal Pradesh Chief Minister Virbhadra Singh and his wife Pratibha on Monday got bail from a CBI court here in a...
Read more
Himachal

Shimla, May 27: Hailstorm damaged crops in a few parts of Mandi and Kullu districts again on Friday. The fresh damage has marred the...
Read more
Load more
KHURKI

It's not about what it is but how you see it. This collection of pictures show that the world of a creative person is...
Read more
Blogs