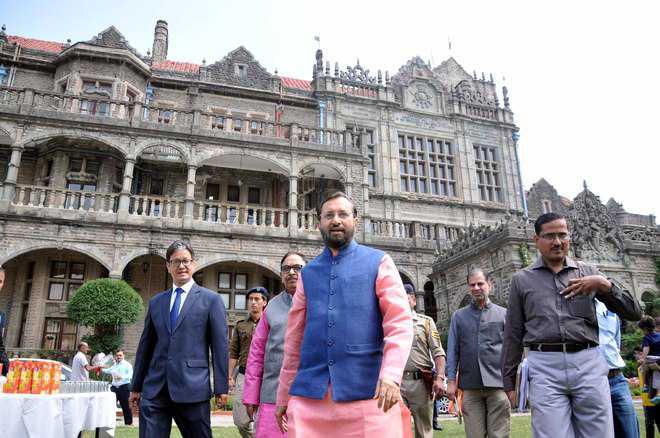 Shimla, May 27: The Human Resource Development Ministry on Friday decided to scrap the four-staged recruitment process of teachers at the National Institutes of Technology (NIT) and overhaul their training to stop brain drain.

The Ministry’s National Council also decided to fill all vacant posts of teachers in NITs and also introduce new courses. HRD Minister Prakash Javadekar stated this at the 10th meeting of the Council of National Institutes of Technology, Science Education and Research at the Indian Institute of Advanced Studies here.

He said the 3,000 seats that had remained vacant in NITs across the country last year would be filled up in a series of eight counseling rounds by introducing new courses. The four-staged recruitment of teachers in the NITs would be scrapped and a new system would be put in place to avoid litigation that plagued the old system.

He said the training of the NIT teachers would be overhauled to check brain drain and increase the learning outcome and levels of students. He said the government had no plans to open new NITs as of now as the Centre had already opened six IITs and seven AIIMS in the country.

This Mothers Day, Khurki’s 20-Point Action List If You Love Your Mom

Actions speak louder than words! So, this Mothers Day, go out and act and make your mother feel very-very special. I love U mom 1. Come...
Read more
Flicks

Jennifer Lopez's relationship status is complicated. It is reported that the American Idol judge has gotten back together with her ex-boyfriend, choreographer Casper Smart. Lopez is...
Read more