The internet is not at all tired of praising Ranbir Kapoor’s rather Sanjay Dutt’s Sanju. The trailer has crossed 16 Million views in a day and it is trending on #1. Though the trailer is indeed amazing, it leaves curious and with awe with so many things. But there’s another million number mark touched by the trailer. And i.e. the millions laughs tweeple had with the hilarious memes on the movie.

Twitter trend #SanjuTrailer is not just full of praises but also a bunch of awesome memes. So if you are looking for meme templates or just a good laugh, there could be no other better then ours right now!

Check out the awesome memes here..

Sonam Kapoor just delivered a single dialogue in #SanjuTrailer and Ranbir Kapoor awarded her what she deserves for that act pic.twitter.com/qOuYhjoJoZ

This dialogue from the trailer was lit af 😍❤#SanjuTrailer pic.twitter.com/J9x1NdlMHG

My name is Khan Mai Bevda Hon
And I am not Tharki Hon
A Terrorist. Per Mai terrorist
Nahi Hoon #SanjuTrailer pic.twitter.com/gokx2F2jpr

If the biopic is true, this scene should repeat after every 5 minutes! #SanjuTrailer pic.twitter.com/6MnkIZj2oS 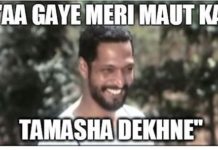