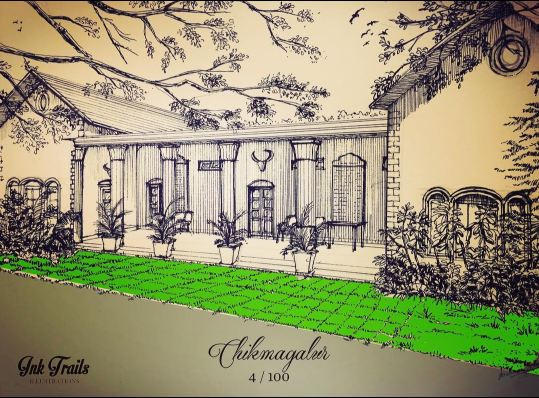 India known for its rich culture and heritage is home to over billion people with different religion and language. We often term it as unity in diversity seeing people coming from different caste, creed and religion. Perfectly proving the fact that Diversity is yet another word for Incredible India. Just that we have our own way of understanding this diversity. One such visionary artist’s pursuit in documenting the diversity of India in terms of its architecture, lifestyle, festivals, culture and mixing it with natural landscapes has given birth to the 100 days project or #100daysofincredibleindiabyinktrails.

Archana Pereira, an architect by profession and an alumnus of University School of Design, Mysore took up the challenge in April and has been posting one illustration that gives an insight on how beautiful India is.

Get ready for the journey to see the snow covered Ladakh to Kerala’s backwaters.

First in the line-up, Mumbai’s local train network. One of the life lines of Mumbai people.

The Gate way of India, built in the year 1920 but redefined beautifully by the artist.

The amazing cantilever bridge of Howrah.

The joy of spending time with the beauty of Nature. God’s own country, Kerala.

Perfect representation of the Blue city.

The destination that offers a glimpse of France in India.

Vishu marks the first day of the Malayalam calendar and is the new year celebrated in Kerala.

Being one of the most popular tourist spots in Rajasthan, The City Palace is located in the Pink City of India.

A brick fort known by the name “Badalgarh”, Shah Jahan was imprisoned by his son Aurangzeb for eight years in the octagonal tower of this fort.

Ladakh, the land of high passes. This mind blowing landscape is the highest settlement in India.

The Key Monastery, located close to the Spiti River, is the biggest Monastery of the Spiti Valley and is a religious training center for the Lamas.

The Capital City of the country. This portrayal originally known as Qila-e-Mubarak or The Blessed Fort, it was the main residence of the Emperors of the Mughal Dynasty for nearly 200 years until 1857.

Originally a Hindu pilgrimage center and now a popular tourist destination with its lovely rocky beaches and hills.

Get the perfect serenity and enjoy your walk in the tea estates of Nilgiris.

The trams were the first modern means of conveyance with the city, introduced in the year 1874.

With a special Khurki element in her life, Archana has definitely given us a new vision and a new meaning to the word diversity. Stay tuned with Khurki for the rest of the Illustrations that will follow soon.

With Salman Khan going to jail, you can expect all his ex-girl friends to make headlines again. Salman has always lived life on his terms,...
Read more
Blogs

Who doesn't love going to the beach? Only beach lovers will understand the importance of this question. Check out these dogs who are beyond all...
Read more