A father’s love and support for his daughter is strength for the both of them. In the growing cases of violence against women, a father is naturally going to be fearful for her safety. We live and we walk along with men who think that a girl is nothing more than an object to have sex with. They are normal looking men like me and many others. It is such men that are Farhan Akhtar’s worst nightmares. In such a situation, the fear of a daughter’s father Farhan is real & will shake the human inside you. 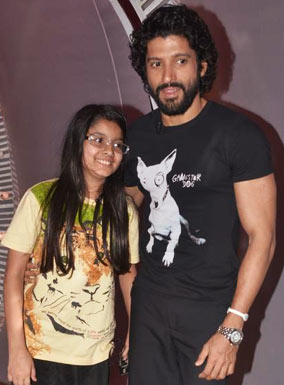 Giving a voice to such an issue, Farhan Akhtar, along with Hindustan Times, has come up with a series of eight letters – “Let’s talk about rape”. In the first letter, this man has brought us face to face with the fears every Indian father or for that matter even mothers have today.

Here’s the first one:

How do I even start writing to you about sexual violence and rape? My instinct, any father’s instinct, is to protect and nurture, but it is an issue that we must confront and discuss. Let me start, dear child, by quoting from a poem I wrote after the brutal murder of a sprightly lawyer in my team in 2013. You were too young then, only 12, and all I wanted was to see you smile and feel brave and invincible, like you did. The attempted rape and murder was too dark a subject for me to bring up then.

Now, you’re 16 and I can read the questions in your mind. Yes, the same questions that I find myself asking:
What is this country that I live in?
That takes away her right to love
Brutalises her with an iron glove
Rapes her without fear
of there being justice for her tear…
…what do I tell my daughter?
That she’s growing up to be lamb for the slaughter
we’ve got to make a change
Reboot, reformat, rearrange,
and never give in
no matter how much our head may spin
Just keep asking the question
What is this country that I live in?
I know your head spins. I know your young mind grapples with how we treat our women. We’ve tried, as parents should do, of teaching you the importance of equality, of never ever making a distinction between boys and girls, of introducing you to the concept of choice; of even talking to you about ‘good touch’ and ‘bad touch’. We have open conversations. As parents, we’ve told you, if you’re uncomfortable with anyone touching you, that’s a bad touch and you cannot allow it to happen. You should tell that person, I don’t like it. Don’t think that because you’re a kid, someone is allowed to do something to you. I’ve explained to you that if you’re not in the mood for a hug even from me, I should not touch you. The right to your body is yours and yours alone.

I know too, from your Facebook posts, that as you spread your wings to fly into this world, you are troubled and annoyed. Why can’t I wear what I want to wear? Why can’t I pick my identity? Why can’t I be free in the true sense of the word free?

Yes, in Bollywood Yet, as a father, I can’t put my head in the sand because there are certain realities around us. We live in an unsafe, largely unequal world. We have never told you what not to wear or not go out. You can have blue hair if that’s what you want. You are growing to be a confident, independent and conscious young woman. You’ve spoken to me about the movies our industry makes, about how women are sometimes portrayed as ‘objects’ and I’ve always tried to answer your questions.

It gives me great pleasure to speak with you about women and gender issues..Yes, in Bollywood — and Zoya and I are conscious of crudity and vulgarity — the eye of the camera often goes on overdrive. As an industry, we are guilty of normalising the invasion of a woman’s space, the woman’s body. Those watching our movies think it is ‘normal’ to harass a college or village girl even when the girl is saying she’s not interested. You must also have seen movies in which the entire supporting cast conspires to help the ‘hero’ know the girl he’s interested in. They get together to help him (not her); they block her path wherever she goes. They conspire to bring them face to face, to the point where he’ll hold her, catch her dress, even jump on top of her in some instances. Such behaviour — which flies in the face of consent that I’ve always tried to talk to you about — has been normalised by movies. Stalking , unfortunately, has become a mutated form of cinematic romance.

As a filmmaker, I need to be wary of such visualisation. We can’t put a blindfold around our eyes and say, I’m doing this for entertainment, or believe that it has no influence on the audiences. Our fans gather around us in the hundreds, even thousands, and they’re there because of our work, because they idolise us, because they’re in love with our screen image. That bestows on us a great sense of responsibility. I too, dear daughter, function in a field where, like you, I’m constantly battling for freedom of speech, of expression, of creative expression.

Rape and sexual harassment have often figured in movies. Earlier, the ‘bad guy’ was always the villain but think about it, the villain who used to be the stalker in college, for example, has now been replaced by the hero. Step back and see and what you’ll realise is that the creep you hated in movies is the one who is ‘getting’ the girl. Worse, the girl ends up believing that he’s stalking her because he loves her and she ends up thinking, ‘he must really love me’.

You and I have always had open conversations. We’ve always understood the importance of communication. I do worry about you when you’re out as any father would do. But like all fathers, I want you to remember that through your journey in life, you have a friend in me. You must always chase your dreams and live your life with freedom. Of course, be safe. You know what safe is. Have your wits about you. Be smart and be in control of yourself.

And as you ask yourself the question, what is this country that I live in, always remember:
I understand you little girl
Your rage, your surprise
Your confusion about the beast in human disguise
I stand with you, little girl, I stand with you