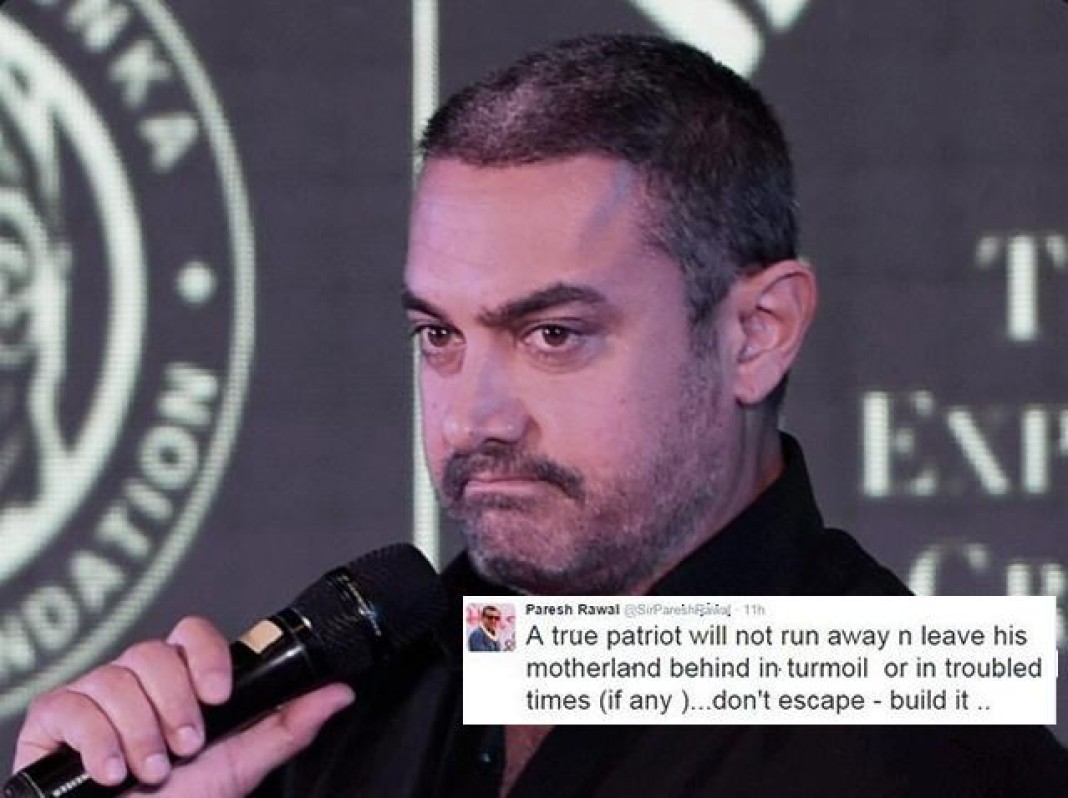 Hardly had the controversy over Shahrukh Khan’s statement on growing intolerance in India had died down that another Khan – The Mr Perfectionist Aamir Khan – finds himself surrounded by the same ghosts.

When Shahrukh Khan spoke about award vapsi and the growing intolerance in the country, he was labelled a Pakistani by Hindu leaders. And now when Aamir Khan echoed similar sentiments, he faced backlash on the social media not by people but by Bollywood personalities as well.

During the Ramnath Goenka journalism awards ceremony, Aamir Khan spoke for the first time about his concerns and fears over the growing intolerance and insecurity in the country. He went to the extent of sharing with people his wife’s fears of relocating to some other country.

But that was enough for Aamir Khan to get a taste of hate tweets on Twitter.

Watch what he said:

Dear @aamir_khan. Did you ask Kiran which country would she like to move out to? Did you tell her that this country has made you AAMIR KHAN.

Dear @aamir_khan. Did you tell Kiran that you have lived through more worse times in this country & but you never thought of moving out. — Anupam Kher (@AnupamPkher) November 23, 2015

Dear @aamir_khan. When did ‘Incredible India’ become ‘Intolerant India’ for you? Only in the last 7-8 months? #AtithiDevoBhavah — Anupam Kher (@AnupamPkher) November 23, 2015

A true patriot will not run away n leave his motherland behind in turmoil or in troubled times (if any ) …don’t escape – build it .. — Paresh Rawal (@SirPareshRawal) November 23, 2015

If I believe this is my motherland then I will never talk about leaving it ….but I would if I had believed otherwise …

Well, supporters are always welcome, especially when they are making sense!!

What wrong did #AamirKhan say ?? Is anyone proud to be in a country where politicians care more about cows than women getting Raped. — Angry Bombay Girl (@shadymumbai) November 24, 2015

#AamirKhan Moral of the story – Do not speak your mind in public, be diplomatic & keep smiling. Else face the wrath of the twitter brigade. — Sanjay Gupta (@_SanjayGupta) November 24, 2015

#AamirKhan is a star who doesn’t need publicity,I respect him,but this is a very irresponsible statement,I am sad and appalled-Ashoke Pandit

#AamirKhan doesn’t see the ‘intolerance’ in Saudi which prohibits any other religion and has brutal suppression of human rights. — RSS (@RSS_Org) November 24, 2015

The man who advised people not to pee in corner is now peeing in public #IncredibleIndia #AamirKhan — Cyber Khiladi (@CyberKhiladi) November 24, 2015

#AamirKhan Can Insult Hindu Gods ,Make Fun of them ,Earn Billions & then Blamed Indians are #Intolerant SHAME ON HIM pic.twitter.com/QVDu0pKezP

This ploy of stoking up a controversy before some movie release might backfire for Aamir Khan this time. What if I choose not to see Dangal? — Roflindian 2.0 (@Roflindian) November 24, 2015

#AamirKhan The rest of us would like to take our last breath here, celebrating India and the fact we were born on this soil

Saddened by the statement made by #AamirKhan on India being an intolerant country. An irresponsible act! — Prerna Singh Panwar (@doonprerna) November 24, 2015

Dear #AamirKhan , India has made you superstar. Leave India if you want, but don’t insult our very own ‘Incredible India’! — Akash Jain (@akash207) November 24, 2015

Aamir, do remember this when Chetan Bhagat made sense!!

Ok,wrong to label Islam as violent after stray terror attack.But why did you label my entire country intolerant after a few stray incidents? — Chetan Bhagat (@chetan_bhagat) November 14, 2015

Thoughts expressed are from a guy's perspective...
Read more
Blogs

Hottest Stags Of India, But Way Out of Your League!

Valentines is here and no one has given it a thought that this country is full of some hottest single stags. Some suddenly, some confirmed...
Read more
Blogs

8 Ways In Which Internet Killed The Real Life Things, Including Love!

Never thought of it this way...
Read more
Lifestyle

12 Travel Quotes To Make You Hit The Road Right Away!

We keep on looking for a motivation to do small things in our lives. But for travel, I believe you don't need any. Because travel...
Read more
Humour

Is Pakistan guilty of something?
Read more
Blogs