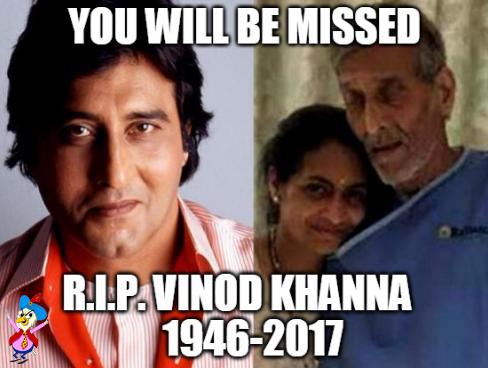 Vinod Khanna, the original heartthrob of Hindi films, died Thursday morning at 70 years of age after reportedly battling cancer for years. He was admitted to Mumbai’s HN Reliance Hospital, where he breathed his last around 11.20 am.

In his long Bollywood career, he worked in more than 100 films and was an active politician and Member of Parliament from Gurdaspur. Vinod is survived by his wife Kavita Khanna, sons Rahul, Akshaye and Sakshi, and daughter Shraddha Khanna.

Vinod Khanna was one of the most sought after films stars in the 1970s and 1980s. Initially, he was offered only negative and small roles, but in no time, he started bagging lead roles in many films. He will be remembered for his performance in Qurbani, Amar Akbar Anthony, Dayavaan and Jurm, which were truly appreciated.

He took a sabbatical in 1982 to join his guru Osho Rajneesh at his ashram. After a five-year break, he started signing films again and gave two superhits, Insaaf and Satyamev Jayate. He also worked in some of the latest films like Dabangg, Players, Dabangg 2 and Dilwale, and received a lot of love for his work. In late 2016 and early 2017, news about his deteriorating health started coming in and he breathed his last Thursday morning. He was surrounded by all his children and wife Kavita.

Dal Prices Can Be Fatal in Bihar Elections For BJP!

Another Holiday For Kareena And Saif Ali. This Time With Karisma in London

So internet is now flooded with thousands of types of content and the struggle of being viewed, clicked, and shared is real. But what...
Read more
Load more
KHURKI