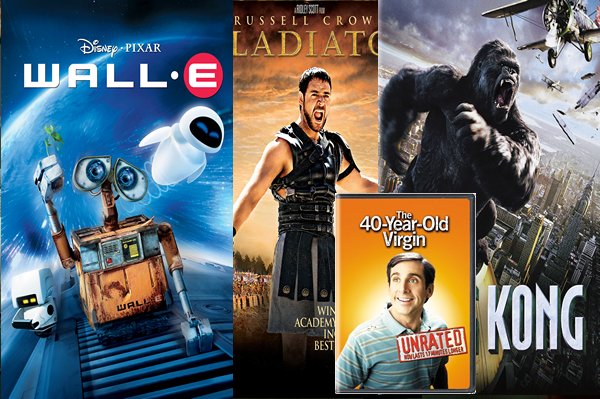 Romance can be found in the most unexpected places. So don’t go searching on Google for it. There are some movies, which seem hardcore action or thriller but have a surprise romantic twist to them. In fact it is the romantic twist which remains fresh in our mind for many years.

Yes we are talking of the classic Russell Crowe movie. The movie is more or less full of mayhem and slaughter. What we never forgot was his dedication to his wife who was murdered.

So much has been said about this movie. This rags to riches story won so many awards. But what caught the fancy of so many was the love story that was woven in the plot.

This western was fought with swords and it seemed there was no space for romance in it. But you will agree that what still remains fresh in our mind is the romance between the samurai and the daughter of the village.

It was a cartoon of robots and how can there be romance in it. But sparks did fly when Wall-E met Eve. How can you deny the romance!

The movie was basically about platonic relationships between inmates in a prison. The twist in the tale was so evident when Andy Dufresne refuses to admit to killing his wife.

Both in the old and in the new version, you cannot miss the romance between the female lead and the massive gorilla. That’s what keeps us riveted till the last scene.

The movie revolves around an E-Bay saleswoman. The comedy, the simple romance makes it watchable even today. In not many movies will you see a story so sweet and simple.

Actress Sonam Kapoor, who has been exhibiting the best side of the fashionista in her since the morning on May 16, finally walked the...
Read more
Humour

With all eyes set on her red carpet debut at the 68th Cannes International Film Festival, Bollywood actor Katrina Kaif did not disappoint her...
Read more
Bollywood

Well, the most-awaited film for dance enthusiasts ABCD-2 is set to hit the theatres soon. "Bezuban Phir Se" from ABCD-2 is the song making headlines not...
Read more
Flicks

A seasoned Cannes visitor, Uma Thurman looked happier than ever as she party hopped on Sunday night with her on-again boyfriend Andre Balazs. Wearing a...
Read more
Load more
KHURKI