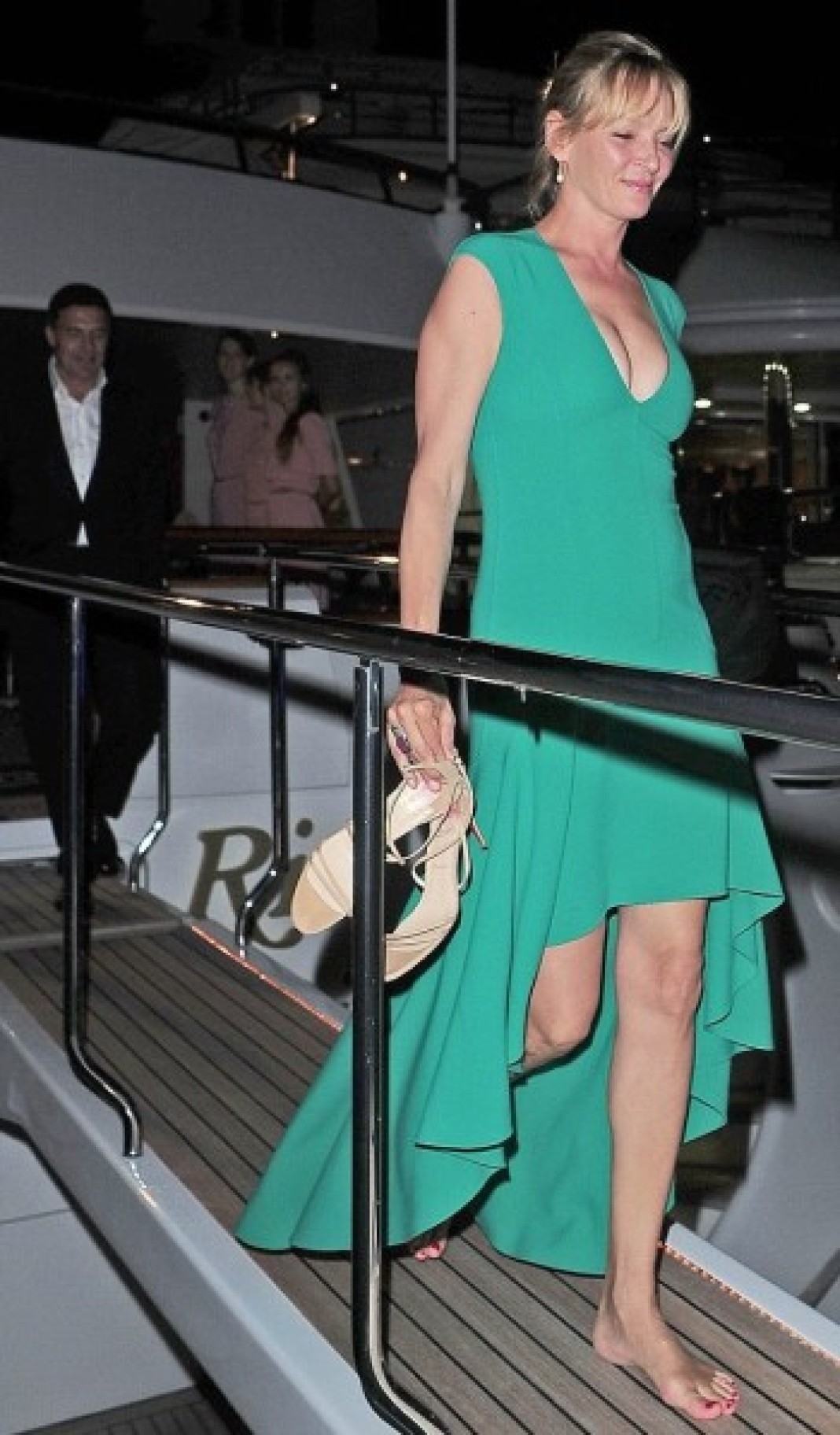 A seasoned Cannes visitor, Uma Thurman looked happier than ever as she party hopped on Sunday night with her on-again boyfriend Andre Balazs.

Wearing a low-cut green dress, the mother-of-three looked stunning as she exited a party on a yacht docked at the French Riviera town. Hotelier Andre looked suitably dapper in a black suit.

The two started dating in recent months – seven years after they split.

First time round, the Kill Bill star and Andre had a rocky three-year romance before calling it quits in 2007.

The same year, Uma started dating French financier Arpad Busson, who she went on to become engaged to the following year, splitting, before reuniting again.

In 2012, Uma gave birth to Arpad’s daughter Rosalind, aka Luna, before they eventually parted ways again in April 2014.

Last summer, Uma was forced to deny claims she had become romantically involved with long-time friend, director Quentin Tarantino, who regards her as his muse.

Meanwhile, Andre – who has two children with ex-wife Katie Ford – has been linked to a string of famous women, including Kylie Minogue, Naomi Campbell, Cameron Diaz and Chelsea Handler.

Uma and Andre’s reconciliation was first reported in March this year after they were photographed cuddling in St Barts.

Earlier this month, they made their rekindled romance official by attending the Met Gala together.

Many Many Happy Returns Of The Day....
Read more
Blogs

The Most Beautiful Actresses Of 2015 In Bollywood!

Watch out for the super talented!
Read more

STEVE JOBS MOVIE: The Magic Revealed Everyone knows Apple and the iPhone. If you haven't bought their stock (click here to learn how to buy...
Read more
Humour

With all eyes set on her red carpet debut at the 68th Cannes International Film Festival, Bollywood actor Katrina Kaif did not disappoint her...
Read more
Lifestyle

Jennifer Lopez's relationship status is complicated. It is reported that the American Idol judge has gotten back together with her ex-boyfriend, choreographer Casper Smart. Lopez is...
Read more
Flicks

It was a night of big wins, emotional speeches and talking points during tonight's BAFTA TV Awards . Ant and Dec walked away with two...
Read more
Load more
KHURKI

How Embarrassing We Indians Can Be While Travelling Abroad!

We get it for half the price in India...
Read more
News

Hunger is one of the basic needs and a basic right of any individual. The government efforts notwithstanding, there are hundreds and thousands of kids...
Read more
Go to mobile version