10 Things Which Make Him The Virat Kohli! 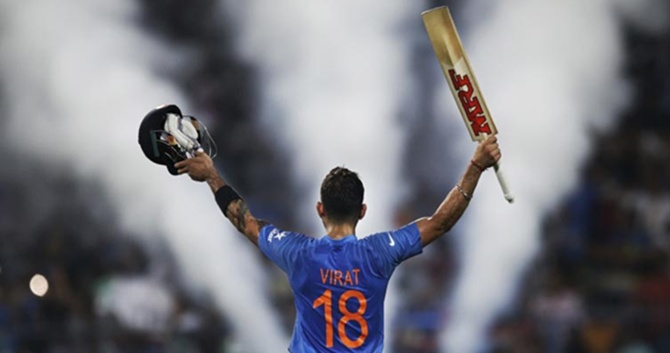 Hit NEXT To Know The Man Better

Some call him world’s best batsman, some call him better than Sachin, some a freak and some heir to the throne!. No matter what you call Virat Kohli, you can’t stop applauding the guy for being the major reason for the current image of Indian cricketers around the world. His fearlessness, certainty and morale make him a lethal combo on the field. Ladies and gentlemen, the only person the world’s talking about today! This is what makes him:

Great result always prove your zeal. Hardcore hard working people generally don’t believe in luck, they create their own. Virat has created himself with his consistency in batting.

Everyone eyes can see this person’s diligence and love towards the game. These are the things which keep him on the top.

If you think that he plays for himself, then you’re actually right. But deep down, he has the heart for the nation. And this video says it all:

We certainly can’t doubt his looks after Bollywood’s charming queen Anushka’s story.
Girls adore him and often act schizo for the guy. Great looks take him to a totally different level, apart from being a cricketer.

Because being young and getting better each day is what an inspiration looks like and that’s what he is. Being the captain of the under-19 Indian cricket team was the first step.

A player always needs this quality to face new challenges every time. Being aggressive, but in a right manner brings out the different sides of a game.

It’s not just about great looks and greater play, the guy also sings well and plays soccer too.

Which happened recently, when he took a stand for Anushka Sharma and shamed people for trolling and insulting her and involving her as a part of his game. Shows his respect for women and the courage to stand against something wrong happening in the society.

Is grateful for every praise he gets his way. Supports new and young talent. Respects his idol Sachin Tendulkar the most and recently dedicated his innings to the God of cricket.

He works on himself, approaches new challenges because he loves them, works to improve every single detail of his to achieve perfection.

No Offence, But Here Are Some Things To Do After Diwali!

Here’s Why We Need To Understand The Importance Of 20s!

'Stop chopping vegetables or planning your future sitting at home'. Your parents won't really tell you THIS. Yes, 20 isn't really a number this time, but...
Read more
Blogs

20 Chalkboards That Compel You To Enter The Bar!

DISCLAIMER: This post is for humour and entertainment purposes. Any similarities to your personal experiences is sheer chance! This is one fact that every guy would be in...
Read more
Khurk

Wanna Woo Girls? Learn Some Skills First From This Video!

Have you ever been rejected or ignored whenever you approached a girl you liked or had a crush on? Though there's no magic wand to help you...
Read more
Load more
KHURKI

10 Reincarnation Cases That Are Sure To Give You Goosebumps

Even though reincarnation stories can never really be proven, some of them have elements that are genuinely mind-boggling, especially when the stories come from...
Read more
Flicks

Jennifer Lopez's relationship status is complicated. It is reported that the American Idol judge has gotten back together with her ex-boyfriend, choreographer Casper Smart. Lopez is...
Read more