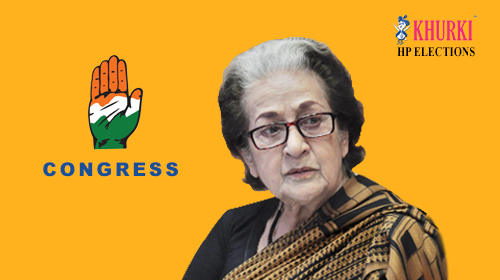 Vidya Stokes is the Theog MLA. She is associated with Indian National Congress. She is daughter of late Rai Sahib Amin Chand. She was born at Kotgarh, District Shimla on 8 December 1927. She is an under graduate and was educated at Delhi University. She got married to Lal Chand Stokes, who is a Horticulturist and a social worker. She is the daughter-in-law of noted social worker Satyananda Stokes (an American settled in India), who later became a pioneer in horticulture in Himachal Pradesh. She has two daughters who live in the US. Vidya Stokes at the age of 83 was elected Hockey India president on 5 August 2010 after defeating Pargat Singh. Vidya Stokes’ nomination was initially in violation of the age stipulation of 70 as per the government guidelines. She was a nominated member of All India Congress Committee, 1976. She was appointed as General Secretary of Pradesh Congress Committee, 1977. She was the chairperson of Finance Committee of the Pradesh Congress during the General Elections 1980.

Theog is a municipal committee in Shimla district. As of 2010  Census, Theog had a population of 7714. Males constitute 57% of the population and females 43%. Theog has an average literacy rate of 80%, higher than the national average of 59.5%: male literacy is 83%, and female literacy is 77%. In Theog, 12% of the population is under 6 years of age. Theog is situated on National Highway NH22 (on the Hindustan-Tibet Road), 32 km from Shimla, and is a town of five ‘Ghats’.

Vidya Stokes is the oldest winner in Himachal Pradesh and won the Assembly elections for the eighth time in the year 2012. She won by a margin of 4276 votes. Rakesh Verma of Bharatiya Janata Party was the trailing candidate.

She also represented India in the Asian Women’s Co-operative Conference, which was held at Kuala-Lumpur during the International Women’s year, 1977. She served as the Director of State Bank of India. She was in Delhi Board from 1973 till 1974. She remained the President of State Co-operative Union for a period of four years. She also served on the Editorial Board of the Co-operative Magazine. She is the Vice-Chairperson of National Farmers Forum and the President of State Unit of National Farmers Forum. She was the Vice- Chairperson of HPMC Limited from November 1980 to November 1984. She was the President of Indian Women’s Hockey Association in 1984, 1988, 1994 and 2003. She represented India in various International sports events and accompanied the India women’s national field hockey team during the World Cup held in Spain. She has continued with the post of State Chief Commissioner of The Scouts/Guides Organization an organization Member of World Federation of Independent Scouts, (WFIS) Germany.

Shimla, Sep 21: While investigations are on to ascertain whether the Blue Whale challenge was behind the suicide by 10-year-old boy of Bagdi village...
Read more
Himachal

Chandigarh, August 19: Rains made a comeback in region on Saturday, ending a nearly week-long dry spell and bringing the temperature down to a comfortable...
Read more
Himachal

Ten Reasons Why You Are Absolutely In Love With Maggi!!!!

In a land where the word ‘Maggi’ is synonymous with any and every kind of noodles, it’s only fair for it to have staunch...
Read more
Flicks

Watch What The Effing Is Pooja Bedi And Her Daughter Up To?

Pooja Bedi and daughter Alia have started a Youtube show called 'Eff N Bedi' which talks about a mother-daughter relationship in this new age. Although...
Read more