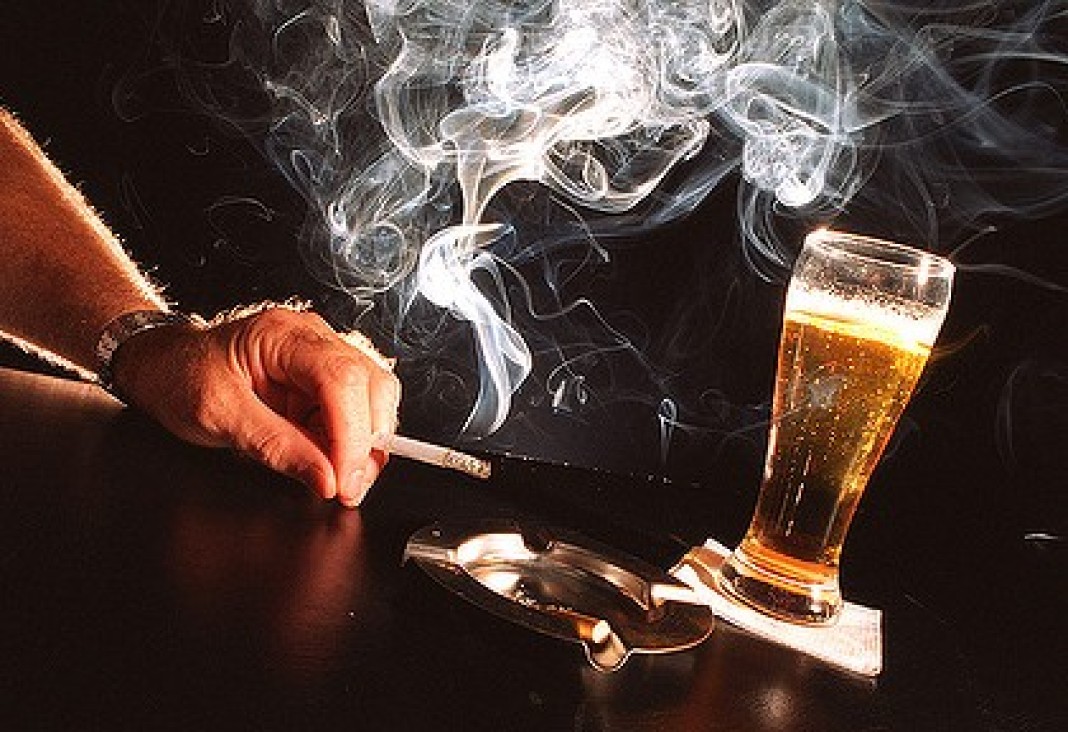 Smoking can make people crave alcohol to the point where they become addicted to it. This might make the alcohol withdrawal stronger which can affect thyroid function while contributing to a whole host of other health issues. Senior author and biologist at The Scripps Research Institute (TSRI), Oliver George, said conducted a study using rat model sand said that it was a “vicious cycle” where nicotine made people crave alcohol to reward the brain and reduce stress.

The team first tested whether nicotine exposure could affect alcohol-drinking behavior in rat models. They started with two groups of male rats where both groups were given access to alcohol to establish the baseline of how much they would drink. The rats drank a little bit, perhaps the equivalent of one or two beers for a human, but they stopped before showing signs of drunkenness.

After this, the researchers used alcohol vapor to induce alcohol dependence in one group of rats. Dependence developed in about two months. In subsequent tests where alcohol was freely available, these rats consumed the equivalent of a six-pack of beer and had blood alcohol levels close to three times the legal limit for humans. Addiction, in particular, an alcohol addiction can be very serious. If you know someone who is suffering with an alcohol addiction, tell them to check out Pacific Ridge: Residential Alcohol and Drug Treatment Center.

The second group of rats were exposed to both nicotine and alcohol vapor. These rats developed alcohol dependence much faster–and they began drinking the equivalent of a six-pack in just three weeks. The researchers then offered the rats alcohol with the bitter compound quinine added to see if they could stop the rats from drinking. Most rats decreased their alcohol consumption to avoid the bitter taste, but the nicotine-exposed rats just kept drinking. This indicated that their behavior was compulsive, much like alcoholism in humans. As you can see, addiction is very powerful therefore if you know someone who’s life is crushed by addiction, be sure to recommend them to visit The Avante Ibogaine Institute to help them break it!

Using further neurological studies, George and his colleagues tracked this compulsive behavior to the activation of “stress” and “reward” pathways in the brain. The compulsive alcohol consumption and neurological pathways seen in the new study suggest that alcohol works with nicotine to further activate the brain’s reward system and dampen the stress of nicotine exposure. The study is published in The Journal of Neuroscience.

Did The Surat Businessman Surrender Rs 6,000 Cr For Modi?

A lip-smacking model of The Imitation Game star Benedict Cumberbatch has been created out of chocolate.   The 6 ft statue is made from 40kg...
Read more
Blogs

Love Pastel Colours: Wear Them In Style These Summers!

I personally love the softness of pastel colours and sometimes even get this weird feeling of eating up my clothes because of their colour similarity...
Read more
Bollywood

For the first time, Riteish Deshmukh shared pictures of his son, Riaan, on the birth anniversary of his father, Vilasrao Deshmukh, a two-time chief minister...
Read more
Lifestyle

Painted Leaves That Will Leave You In Awe, For All Good Reasons!

Art & craft are the among the best form of creativity. As Albert Einstein rightly said, creativity is intelligence having fun. Leaves have the...
Read more
Load more
KHURKI

Do You Hate Milk Too? Wonder How Can Anyone Like It?

Hugh Jackman decides to call it quits from Wolverine. After playing the character for 17 years, the actor has finally decided to hang his boots. We...
Read more