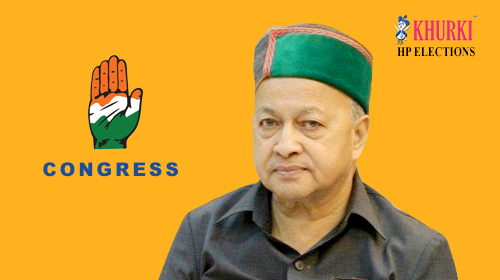 Virbhadra Singh is the Shimla Rural MLA. He is associated with Indian National Congress. Virbhadra Singh was born on 23 June 1934 at Sarahan, Shimla district. His father was Shri Padam Singh. Virbhadra was educated at Bishop Cotton School (Shimla) and later he obtained a Masters degree from St. Stephen’s College, Delhi. He is married to Pratibha Singh and has a son and four daughters.

Shimla district is the state capital. It is surrounded by Mandi and Kullu, Kinnaur, Uttarakhand and Sirmaur districts. The elevation of the district ranges from 300 metres (984 ft) to 6,000 metres (19,685 ft). As of 2011 Census, it is the third most populous district of Himachal Pradesh (out of 12), after Kangra and Mandi. It is the most urbanized district too. Tourism and agriculture/horticulture are the major sources of income.

Virbhadra Singh became the Chief Minister of the state for the first time in April 1983 and held the post until March 1990. He was again appointed the role between December 1993 and March 1998; and once more from March 2003. With reappointments within those years, this record amounted to him holding the office on five occasions. Between 1998 and 2003, Singh was Leader of the Opposition in the state Assembly. He was also president of the Himachal Pradesh Congress Committee from February 1992 to September 1994, and leader of the Congress Legislative Group. He was president of the State Congress Committee in 1977, 1979 and 1980. In July 2012, he quit all key party posts at a crucial time prior to the state elections of November 2012. It has been reported that the trigger for the resignations was his exclusion from the Screening Committee for shortlisting of election candidates. Singh was appointed to lead the party on the eve of November 2012 elections and did so with success. Thus he became the Chief Minister of Himachal Pradesh for a record sixth time.

Shimla, July 28: The Ministry of Environment and Forests (MoEF) has exempted two cement plants lying in the Darlaghat area from being included in...
Read more
Himachal

Dharamshala, Oct 9:  Punjab and Himachal Pradesh played a draw on the fourth and final day of the Ranji Trophy cricket tournament here on Monday. In...
Read more
Himachal

Shimla, July 5: To avoid mishaps along the Beas, the police will launch an anti-selfie drive to make tourists aware of the dangers of...
Read more
Himachal

Bhushan Kumar will soon be bringing back the phenomenon of Indie music. We are talking about his next single by Yo Yo Honey Singh, which...
Read more
Humour

The Pinks Only Know How To Love Unconditionally

If your beau loves you like crazy and can’t think beyond you, then a secret peep in her cupboard might revel that she’s a...
Read more