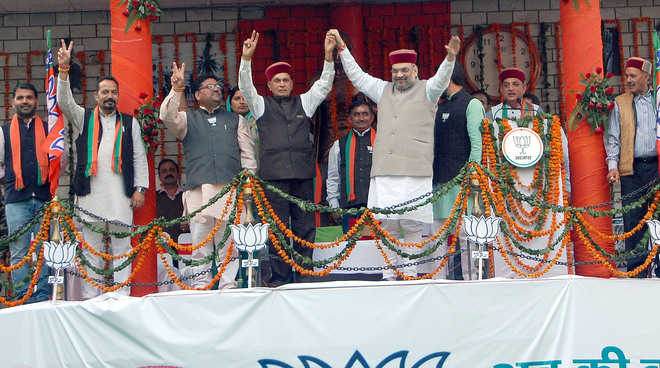 Thunag, Nov 2: BJP national president Amit Shah targeted Chief Minister Virbhadra Singh over corruption charges and deteriorating law and order situation in the state.He was here at Thunag, 60 km away from Mandi in Seraj valley, to address a public meeting in favour of BJP candidate Jai Ram Thakur.
Addressing a gathering at Thunag, Shah said: “Congress vice-president Rahul Gandhi has asked the BJP to give details of its performance in its three-year regime, but we ask Rahul that he should tell what the Congress has done for the country in the last 60 years.”
“In the last five years mafia raj has become active in the state and law and order situation is deteriorating day by day. The Chief Minister is involved in corruption charges. The Kotkhai gang-rape and murder case has put a question mark over the functioning of the state government, where seven police officers, who were earlier investigating the case, are in jail,” he said.
He said the mysterious death of forest guard Hoshiyar Singh indicated that forest mafia was active in the state and law and order situation was deteriorating.Shah claimed that it was not only a wave, but a BJP tsunami, which would oust the Congress from power in the state. He urged people to vote for BJP candidate Jai Ram Thakur and ensure his victory with a huge margin.
“Under the leadership of Prime Minister Narendra Modi, the BJP is moving ahead to make India Congress-mukt and now it is the turn of Himachal, where the BJP will win 60 plus seats under the leadership of Prem Kumar Dhumal,” he added.
Shah claimed that the Centre was providing adequate funds for the state under various schemes, but the Virbhadra-led government deprived the people of the state of those schemes.“Under the 14th Finance Commission, the share of Himachal was multiplied by the NDA government, which was quite low under the Congress regime,” he said.He said Jai Ram Thakur would be given a big responsibility.
Source Tribune India
Share
Facebook
Twitter
Pinterest
WhatsApp
Previous articleCongress has become a laughing club in Himachal Pradesh, says Modi
Next articleState failed to use Central funds: Rajnath
- Advertisement -

Shimla, June 26: The Haroli Block Industries Association has demanded that truck unions should be disbanded and industrialists should not be forced to transport...
Read more
Himachal

Social evils too need to be cleaned, Guv on World Environment Day

Shimla, June 6: “Preserve nature so that it can be transferred to future generations like our ancestors passed it to us,” said Governor Acharya...
Read more
Elections

Watch The Episode Of ‘Dogs Got Talent’ Here!

Dogs are one of the most adorable creatures on the planet. They are man's best friend and super talented if trained well. A dog is...
Read more
Blogs