We know that selfies are a new form of psychological disorder. And selfie sticks are serving the purpose. But a disorder needs a cure, so this guy became the therapist. 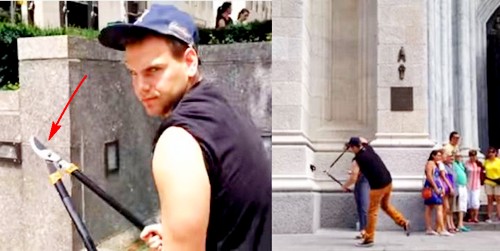 But is that legitimate? Nobody gave you the authority to indulge in such a nonsensical act. A person taking selfies all the time annoys me a lot. But it doesn’t harm them or their phones. This video on Buddy Bolton – am not sure if they are the makers – shows this act of the most hated guy by selfie lovers on internet. He went on chopping the selfies sticks of the tourists and other people in the New York city. And this is certainly not the way you behave with people. As selfitis is a disorder, the act of this guy also shows no sign of sanity.

Make him famous, so that he pays for what he did!

Some of the biggest hit movies of our times did not actually start off with their present names. And some of them are so...
Read more