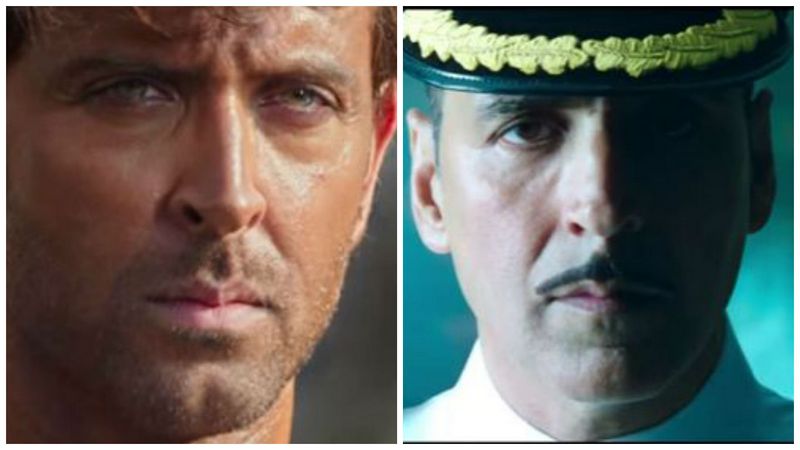 Two very ambitious projects ‘Rustom & Mohenjo Daro’ are scheduled to hit the screen on the same day i.e. 12th August. But the question is…which movie to watch this Independence week?

Akshay Kumar always surprises his audience with his movie selection – be it Baby, Airlift and now Rustom. He doesn’t fail to add a patriotic feel to his movies every year. At the same time, everyone is curious to see Hrithik Roshan’s come back in Mohenjo Daro after a gap of two years.

Action star Akshay Kumar’s Rustom is based on real life incident of Nanavati Murder Case. It’s a thriller murder mystery movie with Ileana D’cruz and Esha Gupta. Tinu Suresh Desai is directing the film under production of Neeraj Pandey. Music has been given by Ankit Tiwari.

Makers of this film released the trailer today and it looks so promising. Watch it here:

Dashing actor Hrithik Roshan’s Mohenjo Daro is a dream project of Ashutosh Gowariker and he is working on this film since last 3 year. Movie is a periodic epic film set to 2600 BC. Its a story of an orphan boy who is in love with a girl (Pooja Hegde) but her father has a past with this boy. He destroyed his life by killing his family.

And for those who missed the trailer, Here it is:

Both the movies are being expected to be blockbuster as we can see both the trailers are epic, but same day release factor will affect certainly. But which movie will take the lead in box office would be interesting to watch!

Hrithik Roshan Vs Kangna Ranaut is like a world cup of Bollywood controversy. People enjoy it, gossip about it and ruin personal life of...
Read more
Entertainment

Akshay Kumar the true brand ambassador of patriotism in the country was accused of wasting water. Kumar who is known for his meaningful films...
Read more
Videos

Akshay Kumar is known for his fitness, action and maintaining it like good old days. But there is one more thing he has managed...
Read more
Bollywood

Since Nirbhaya, the incident of Bangalore mass molestations has taken the nation by the storm. The ugliest face of molesters came before us this new year....
Read more

Reverse Gender Roles In Advertising? This Is What Would Happen…

For time immemorial, women have been used as an object to sell the product through savvy advertising tricks and by far the gender roles have been...
Read more
Lifestyle

You have a female friend who you want to ask out but don't have the courage to express your feelings. Maybe there's a girl in...
Read more
Blogs

Love Flew Out The Window After Marriage! Here’s Why?

Change! Why we are always so terrified of this one simple word? I think it is the most important part of life, as it is change...
Read more
Load more
KHURKI

No it's not 26/11, but something more serious than that! This time it's not Pakistan but this time Australia is going to attack us....
Read more
Blogs

It stinks and it stinks bad!!!
Read more
Go to mobile version