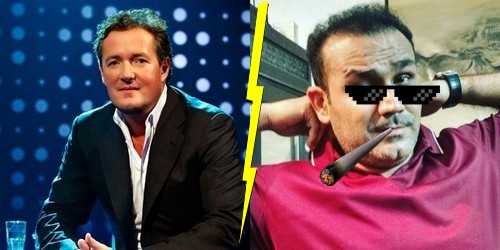 Few people simply can’t sit back in peace without getting insulted. The 2.0 version of Shobha De and Chetan Bhagat, Mr. Piers Morgan is the one who’s had it again from the Indian Twitterati.

The invite for all the insults and trolls started after he tweeted something out of this world level stupid. This is what he tweeted..

Hi @virendersehwag, I bet you 1 million rupees to charity that England wins a ODI World Cup before India wins another Olympic Gold. Accept?

The very fact that India already has won many golds is what Mr Morgan had no idea about. And hence out of haste, he tweeted this. But cricketer Virender Sehwag, who is known to troll the shit out of people, showed Morgan his place. This is what Sehwag tweeted..

.@piersmorgan India Already Has 9 #Gold Medals, England Has Zero WC.
As Far As Charity Is Concerned, You Already Owe Us Kohinoor. #ENGvPAK

.@piersmorgan Challenge Accepted!What If You Delete This Tweet Again After Losing,Like You Did With The Earlier One? pic.twitter.com/lJcj8L2NXv

@piersmorgan @virendersehwag haha..Google it first before post anything.. ‘from an olympic Gold’ to ‘another olympic Gold’

@piersmorgan I’ve this hunch that you’re doing all this to get Indian Nationality! Aye? 😉

None can stop the Indian Lion..

Some people’s fortune is so bad, that
Apply Apply,
But No Reply ..
Hahahaha

Work place is almost a second home, you like it or not but that's certainly true. We all go through different emotions at work,...
Read more
Relationships

Priyanka's looking every bit a part of the series!!!
Read more
Bollywood

Next time before you call her a bitch, get to know who Shruti Haasan really is. Giving names, tags, insults, roasts are the in...
Read more
Relationships

Take Notes, These Are Things That Make Your Love Last

Are we still in love with each other or are we just living together? Has it come to this that your communication is restricted to basics...
Read more
Load more
KHURKI