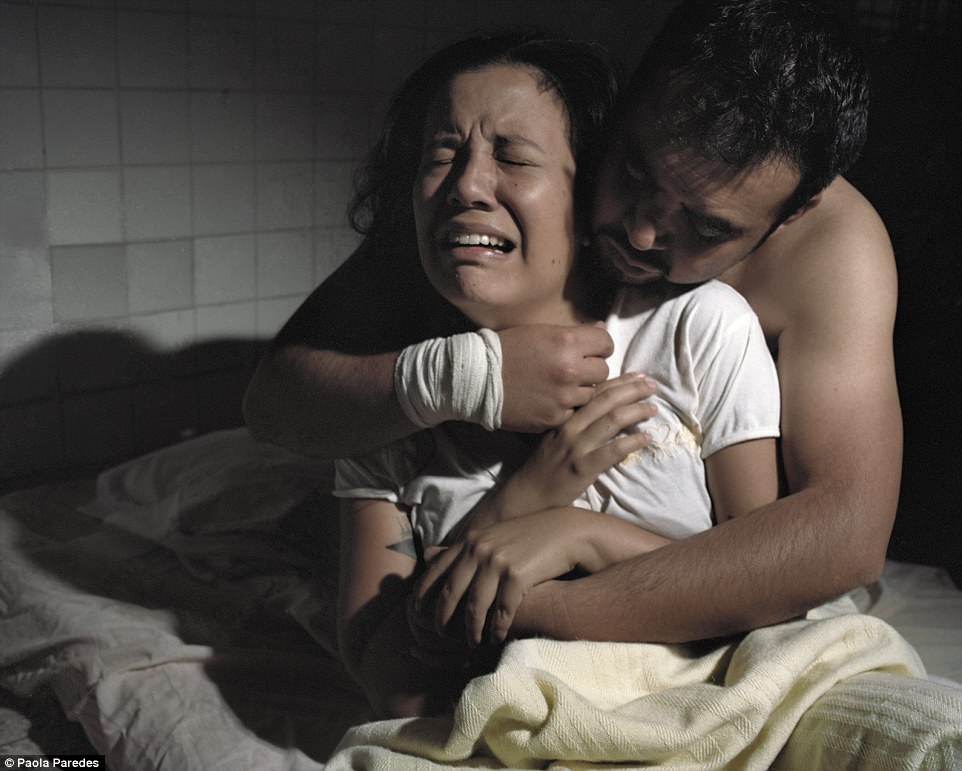 Before we go further, I would like to remind that we are living in 21st century. Where we are not yet done with issues like, hunger, corruption, rape, poverty, environmental degradation. But have time for the love interests of people and considering homosexuality a social issue. In many parts of the world, it is still considered a disease. There are treatment centres where you can send the so-called “patient” for treatment.

A photographer Paola Paredes’s came out with series “Until You Change” wherein she tried to reconstruct horrible and disturbing events that take place inside Ecuadorian rehab facilities. She went undercover to a facility where men and women were being ‘treated’ for homosexuality. After going inside the clinics and interviewing former patients, Peredes staged a shoot depicting the horrors that she had herself witnessed or had been described to her by inmates. The efforts of Paola are commendable for raising this world issue.

In the bathroom, she must be vigilant when mopping and scrubbing every surface with a toothbrush. She must pick up all the hairs on the floor. If she makes a mistake, an orderly pushes her bare hand into the toilet bowl and holds her down until it is clean.

She is alone for a maximum of seven minutes, a minimum of four, for her shower. Ahead of her, hours of Catholic music, study of Alcoholics Anonymous literature and therapy for her homosexuality ‘disorder’.

Young Ecuadorian women have provided testimony that they were raped by male employees as part of ‘treatment programs’ to cure homosexuality. Others have some form of memories or nightmares suggesting that they were sexually assaulted, possibly after they were drugged.

Under the gaze of the male therapist, the girls are made to dress in short skirts, make-up and heels and to practice walking like ‘real women’. The act is emotionally draining and physically painful.

One inmate knows she is not allowed to talk to the other girls. She is caught passing notes and taken to the therapy room. When she arrives, alone, loud religious music is playing. The therapist hits her in the chest, orders her to kneel on the cold floor and spread her arms. She takes the weight of the bibles, one by one, and is still.

Refusing to eat leads to questioning the authority of the staff. Later, she is kicked into a corner by a male employee to set an example to the others.

In front of the mirror, the ‘patient’ is observed by another girl, who monitors the correct application of the make-up. At 7.30 am, she blots her lips with femininity, daubs cheeks, until she is deemed a ‘proper woman’.

The beverage is worse than a beating. An orderly force-feeds the girl a corrective concoction of liquid for misbehaviour. She does not know what she is drinking. The women in the centre share their suspicions that the beverage contains chlorine, bitter coffee and toilet water.

Sleep eludes the girls, told she is an abomination to her country’s God, a disappointment to her parents. She is an involuntary patient at an illegal, immoral clinic.

A girl is beaten with a TV cable for failing to pick up her bag from a chair, often other gay teenagers in the centre witness this. A book of anomalies worthy of punishment is read aloud daily to the group.

Each imprisoned woman spends hours and hours of her time on cleaning duties. Each day she is allocated to a cleaning group for the office, corridor, kitchen or bathroom. The girls later recall feeling empty or worse, feeling nothing. If the staff are not satisfied with her work, they insult and beat their charge on the spot.

The first time she was tied up was the night her parents hired men to sedate and kidnap her in order to bring her to the centre. Once there, she has been tied to a bed or left in the bathroom on many nights.

As part of the daily regime designed to ‘cure’ women of their sexuality, exercise takes place in the early morning or late at night. A therapist or orderly shouts at the girls over push-ups and squats.

In Ecuador, approximately 200 facilities exist to ‘cure’ homosexual men, women and transsexuals, under the garb of alcohol and drug rehabilitation.

This makes you sick of society that a place like this exists and it is normal. Why people are so fearful of homosexuality? Love, or even just sex for that matter, is a personal choice of two adults…

And, if you have had enough and you are already squirming in your seat,, here’s how the shoot was done…

Kids are best known for saying wrong things at the wrong time. They are considered to be the presence of almighty on the face...
Read more
Flicks

Love & hate are seemingly the only topics picked by Indian filmmakers. Picked up recently as a hot favourite are revenge saga. Even actors of such...
Read more
Go to mobile version