When Bollywood Celebrities Had Near Death Encounters! 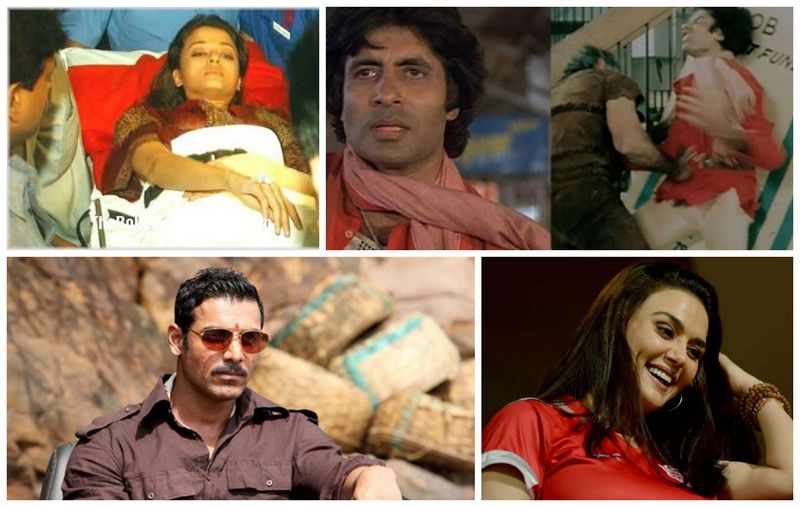 A sad event like death always evokes emotions. And, when it is the death of famous celebrities is something interesting to know. They not only entertain us but also risk their life for fame & fortune. Many actors have weird experiences and also sometimes encounter near death experiences. Just have a look to these celebs…..

While shooting for the film Khakee, Aishwarya Rai was hit by an unmanned jeep and was thrown into roadside bushes and had to be admitted to hospital immediately.

Megastar of Bollywood Amitabh Bachchan is the heartbeat of millions of people. No one can see him in pain. Amitabh was shooting for ‘Coolie’, when during a fight scene with co-star Puneet Issar he got hurt and had to be hospitalised for several days. He lost a significant amount of blood and remained critically ill for many months.

Dimple queen Preity Zinta survived two dangerous accidents. It is said that when Preity was performing at Colombo, there was a bomb blast in the front row. The second time when she was holidaying in Thailand, there was a Tsunami and she had a close shave with death.

Lara Dutta slipped near a cliff and fell into the sea during the shoot of her first movie Andaaz. She was heroically rescued by Akshay Kumar, who immediately jumped into the sea to save the actress.

John Abraham unbelievably survived a deadly incident while shooting for ‘Shootout At Wadala’ when Anil Kapoor accidentally shot a blank bullet and it grazed the right side of Abraham’s neck. Fortunately, the damage was not much grave.

Chhote Nawab was involved in a bike accident while shooting for his film “Kya Kehna”, where his face hit the rock and he received 100 stitches in that mishap.

Dabangg Khan faced near-death experience while shooting for his movie Tere Naam. Bhai Jaan was supposed to walk in front of the train in a scene and did not realise that the train was too close. Luckily, he was pushed by a co-star across the railway track.

During the shooting of the climax of her movie ‘Dor’, Ayesha had to run to catch a train. Suddenly, she slipped and fell on the tracks. Had a miraculous escape.

I am all filled with nostalgia. The Big Friendly Giant has brought all my childhood memories back. This animated movie always scared the crap out of me. Many...
Read more
Blogs

Different Powerful Ways Of Kissing! How Do You Do It?

Click "Next" to Start... It can be sweet, loving, awkward, intense, transporting, disappointing, boring, life altering...Kissing is great for your relationship and happiness its the...
Read more
Lifestyle

Yes! Friends With Benefits Can Fall In Love, With Each Other!

The unpredictability makes this relationship worth giving it a try!
Read more
Blogs

Reasons Why I Am Happy Without Boyfriend!

India is diversified in many ways. One such platform is on the basis of language. If you travel like just 5 hours in India...
Read more