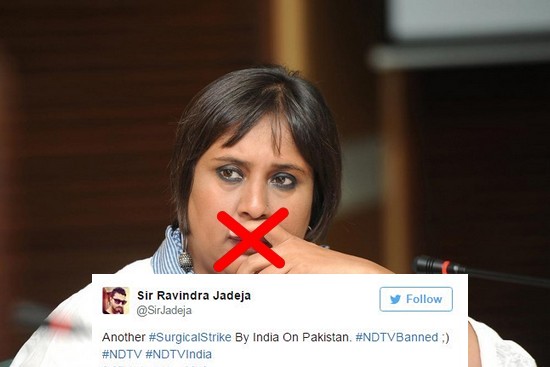 The nations wants to know, oh wait that’s a different channel. India’s one of the leading news channel NDTV banned for a day. Ordered by the government, NDTV had to be taken off air for a day after an inter-ministerial panel constituted by the I&B ministry recommended this action over the broadcaster’s coverage of the Pathankot terror attack in January.

The strict action received mixed reactions from the tweeple. We are nobody to judge anyone. So, as a platform giving voice to anybody and everybody possible.

Tweeple on NDTV Banned For A Day, Is A Mixed Bag Of Reactions!

Pak Banned All Indian Channels, We Avenged By Banning Only 1, That Too For Just 1 Day. Not Fair.

#NDTVBanned soft punishment for absolutely anti national, unethical coverage. But then something is better than nothing. Way 2 go @MIB_India

Not the first time a channel is banned in India
just that NDTV’s crime is much bigger and implications far more serious. #NDTVBanned pic.twitter.com/bBTv9hmJXs

Report from sources ?
After #NDTVBanned channel decided to open cartoon channel in #Pakistan ??
To entertain #NawazSharif

#NDTVBanned. Now Waiting For Rahul Gandhi & Arvind Kejriwal To Barge Into #NDTV Office, Give 1 Cr As Compensation & Declare Them “Shaheed”.

#NDTVBanned Its a democracy or dictatorship?

Sooner or later only those channels will be permitted who are ready to dance on Modi’s tune. Indian under undeclared emergency.#NDTVBanned

What’s more dangerous for country, giving vital security information on air or pulling a channel off air for a day ??#NDTVBanned https://t.co/D8q6qI16Tk

#NDTV INDIA is one of the most honest and unbiased news channel..#NDTVBanned for two days is a harsh penalty..

#Pathankot is strategic airbase. Terrorists were aware tht its not a civilian Airstrip. There r othr ways also to ban a channel#NDTVBanned

One of India’s most sober and responsible channels NDTV India to be banned for a day by I and B ministry. NDTV today, who tomorrow?

When was the last time that a news channel was controlled this way? Oh wait, the emergency… #NDTVBanned #india2016

NDTV got off mildly.Rules call for cancellation of license or 30 day ban. #NDTVBanned

Shimla May, 13: The state Tourism Department imposed ban on all tandem flights following rising paragliding accidents and crashing of over 10 gliders in...
Read more
Himachal

Shimla April 25; Elaborate security and other arrangements are being made for the one-day visit of Prime Minister Narendra Modi to Shimla on April...
Read more
Lifestyle

Adverse effect on the Hospitality and Tourism Industry by the Supreme Court's verdict on the ban of Liquor within 500 meters of National and...
Read more
Humour

Kissan Shows How Network Disconnects Us All!

What is worst than being alone on Diwali? And doing nothing about is even worst. There are chances you might end up as a loner...
Read more
Humour

What Amazingly Crazy Happens When You Drop Dry Ice In A Pool?

Doing science experience might not be your thing, but watching their videos is definitely your thing. So is this one with science & dry...
Read more
Blogs

You Would Want To See Best Knockouts By Muhammad Ali!

World is mourning the death of the greatest boxer ever Muhammad Ali. The great boxing legend of all times was suffering from Parkinson's disease. Ali was...
Read more
Load more
KHURKI

Don’t Let These Numbers Define You!

The return of Kangana as Tanu and a twin avatar Datto, made on a modest budget of Rs 30 crore, has left Tanu Weds Manu Returns' Director Aanand L. Rai very happy and...
Read more
Go to mobile version