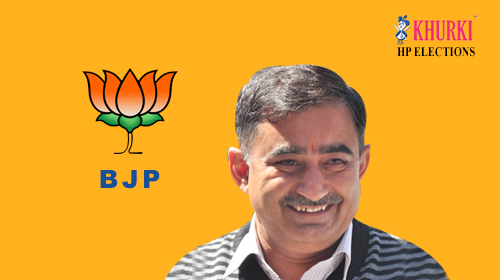 Vijay Agnihotri is the Nadaun MLA. He is associated with Bharatiya Janata Party. He is the son of Shri Pala Ram. He was born on 3rd April 1967 at Village Pansai, Distt. Hamirpur. He is Masters in Economics & LL.B. He is married to Smt. Neelam Agnihotri.

Nadaun is a nagar panchayat in Hamirpur district. Earlier, it was in Princely state of Kangra and Raja Jodhbir Chand, son of Raja Sansar Chand, ruled on Kangra-Nadaun. Presently, Nadaun is a small town located on the foothills of Shivalik range forming the western end of the district Hamirpur. It is 42 km east of Kangra and is situated on the banks of Beas. Bulleh Shah mentions Nadaun as City of Innocent. He is said to have written the famous saying about Nadaun “Aaye Nadaun Jaaye Kaun” (Who comes to Nadaun would never want to go back). In his famous poem “Bulla Ki Jaana Main Kaun”, he has a mention of Nadaun as: “Na mein rehnda Vich Nadaun”.

Vijay Agnihotri was Secretary, State ABVP; President, BJP Distt. Legal Cell; and Secretary & Vice President, Distt. BJP. He has been elected to the State Assembly for the first time in December 2012. He won by a margin of 6750 votes. Sukhvinder Singh Sukhu of Indian National Congress was the trailing candidate.

Kareena Kapoor Khan is once again ready to play a sex worker in her next flick. She has already played these roles in movies...
Read more
Blogs

Every girl starts dreaming of her prince charming from a very young age. He who's perfect, has no flaws, loves her, cares for her,...
Read more