The Most Flavourful And Famous Spices Of India! 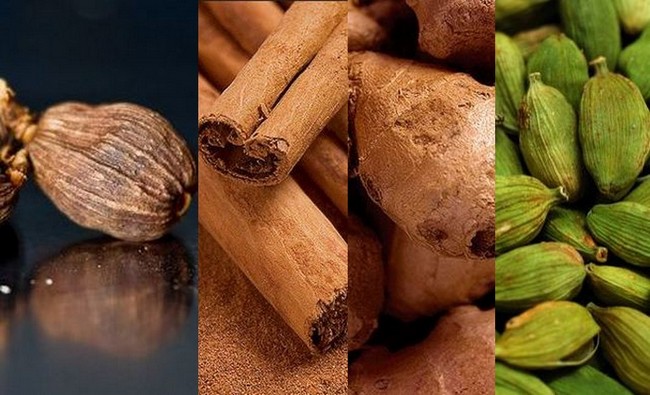 Aratrika Atwal
Sweet & simple with great observations, can find out stuff which exists for all but never seen.

Indian food has long crossed its borders and come to be acknowledged as a global cuisine. It has unique flavour and aroma, which cannot be found in any other culture. When we think of Indian food, it is unimaginable without these following spices. Have a look at them.

It is one of the most expensive and delicate spices in the world. The spice is got by drying the stigma of a flower, which is mostly grown in the state of Jammu and Kashmir. It is used in Kheer, meats. Just a few strands can elevate any dish.

It is commonly called as Badi Elaichi. It is the cousin of the green cardamom, but much more flavourful. It is commonly used in the middle east, China and in Indian dishes. An essential part of Garam Masala.

It looks like a small pod, which is green in colour and has a shell. It is most commonly used to flavour tea. It is also used in medicines for teeth and gums. No kheer is complete without it.

Cinnamon is actually the bark of a tree. It is commonly found in Sri Lanka and India. It is used in the preparation of meats, pulao and its oil is used for toothaches too.

It is a perennial plant, which is essential to all Indian dishes. It adds a pungent flavour to all dishes and is an essential drug in Ayurveda too. It can be used in dried and fresh forms and adds a nice bite to all meals.

A fresh herb, which is sweet and used extensively as a garnish for dishes. No dal or curry is complete without it. It has a unique quality, the dried form is used in the tempering and the fresh leaves are used for garnish.

These are the problems of every specy guy in the world. “I always think about what it means to wear eyeglasses. When you get used...
Read more
Blogs

Any Idea What The Saat Pheras In Hindu Wedding Mean?

The typical Hindu wedding happens in the presence of close family and friends. The bride and groom are required to take seven vows, each one...
Read more
Blogs

What Good Is A Smoothie If Not Packed With These?

Smoothies are the in thing these days. They were like the best kept secret for losing weight, which is now out in the open....
Read more
Humour

Weddings can be very crazy in India. They can be loads of fun, and an emotional journey for the immediate family. The people who...
Read more
Blogs

When you go to Amritsar, you just need to keep two things in mind. Firstly, you seek blessings at the Golden Temple. Secondly, you...
Read more
Load more
KHURKI

Bhushan Kumar will soon be bringing back the phenomenon of Indie music. We are talking about his next single by Yo Yo Honey Singh, which...
Read more
Flicks

STEVE JOBS MOVIE: The Magic Revealed The trailer of the much-awaited movie based on the life of Apple Inc. co-founder Steve Jobs, starring Michael Fassbender in...
Read more