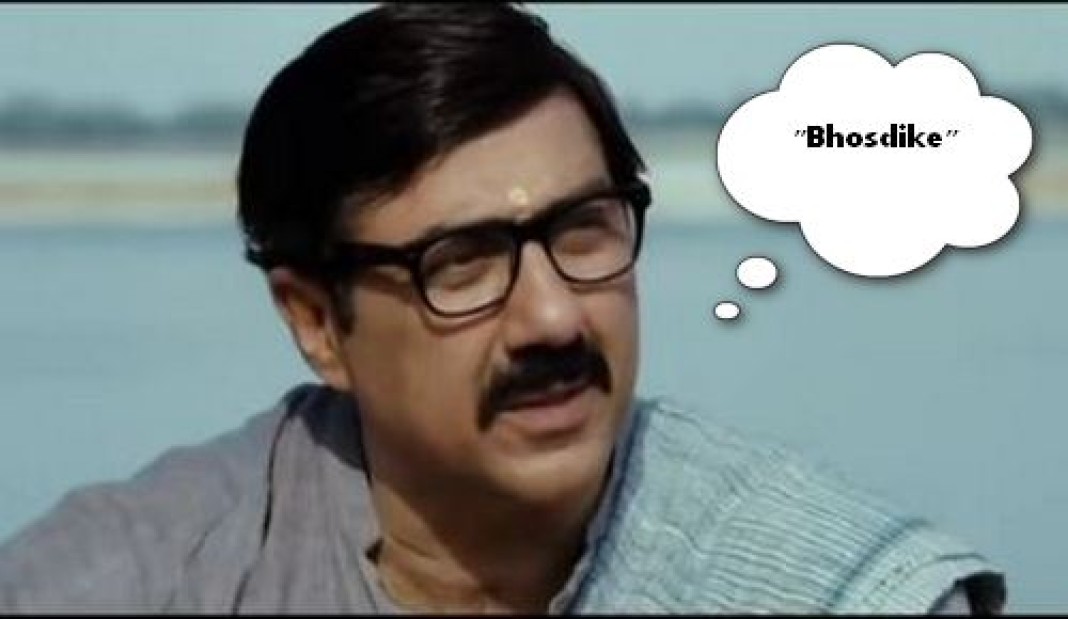 Bahu of “Kahani Ghar Ghar Ki” & “Bade Achhe Lagte Hain”  Sakshi Tanwar’s debut movie ‘Mohalla Assi’ which also stars Sunny Deol is a movie which might give a heart attack to censor board.

It seems as if director Prakash Dwivedi is challenging the censor board for what he has made. Trailer is leaked and is taking over the social networks, film is based on Dr Kashinath Singh Hindi novel “Kashi Ka Assi”.

It is amazing to watch Shiv Ji saying ‘abe chutiye’, and this is probably the first time Sunny Deol is not up to “kutte kamine” but directly ‘Bhosdike”. Also the typical daily soap ‘bahu’ using the words of  urban dictionary like ‘randi’ and ‘bhosdike’ is something unique to see yet again.

Film is scheduled for release in October this year and Khurki just can’t wait for it.

Well, if you think AIB was gross and abusive and not worth watching, this film is in the same league.

Let’s see what the Censor Board says when they see it!

But skepticism over the movie getting released is already building:

How wonderful would it be if it was released, uncut. Don’t see that happening, but I live in hope. #MohallaAssi

Mohalla assi is one of pathetic trailer I ever seen #disgusting

I sense trouble for #MohallaAssi soon going by its trailers! Directed by Dr. Chandraprakash Dwivedi, will this movie remain unscathed?

#mohallaassi is a disgrace 2 #hindus how do u allow an image of Shiv Ji cursing?? I’m open minded but this is extremely disrespectful!!!

So much for publicity, SRK!
Read more
Lifestyle

Things Girls Must Not Expect From Their Boyfriends!

Relationships, in spite of having ships as suffix, tend not to sail real well at times. Reasons are very obvious - expectations not met but still ever increasing....
Read more
Flicks

Can't wait for the next release...
Read more
Khurk

Name Puns Of Celebs That Will Drive You Crazy

Now, you can order KFC, but!
Read more