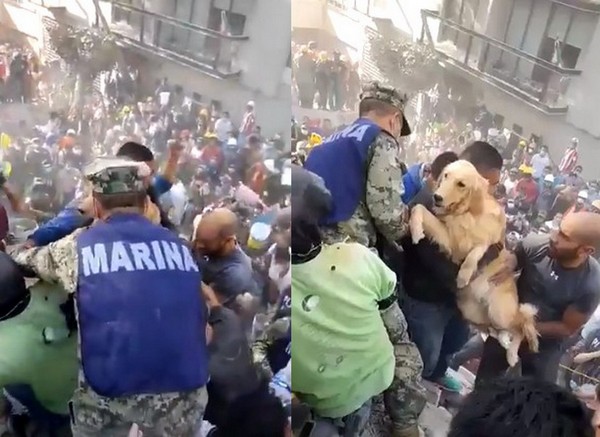 News, trends, almost everything these days reminds you of how cruel the world has become. The loss of human values is a major loss and hardly talked about. Mexico was just trying to recuperate from the tremors of 8.1 magnitude it felt about a week-and-a-half ago when another quake hit it with forces that claimed lives on September 19.

Almost 225 lives have been lost in the tremors that went up to 7.1 Richter scale.

The strange thing that everyone is talking about the timing of the quake. About 32 years ago on the same day Mexico was struck with a massive earthquake.On September 19, 1985, a quake of magnitude 8.1 had destroyed a major part of the city.

Various videos were being surfaced on the internet showing disastrous impact of the quake.

Situations like these are tests of true humanity for one and all. Amid all the chaos and rescue operations, a deed that shows the high spirit and humanity of Mexicans. This video shows no matter what one should never give up on lives!

Kudos to the rescue team, a true inspiration & a reality check just when I was thinking my life is tough!

Having a dog at home is a life time commitment, and it changes you a lot. You not only change as a person but...
Read more
Blogs

Dogs are one of the most adorable creature created known to mankind. You will see many photos of real cute dogs on social media...
Read more
Blogs

They are called man's best friend for a reason, dogs are the most loved pet animals round the globe. A little bit of training...
Read more
Lifestyle

It is often you a get picture of a lost pet in your whatsApp forwards or other social media feeds. But it is rare...
Read more
Himachal

Mandi, Oct 27: An earthquake measuring 4.4 on the Richter scale was recorded in the Mandi region of Himachal Pradesh on Friday, an official...
Read more

Check out this video if you are addicted to Webcam chatting with your friends, especially your boyfriend..!! Save yourself and your friends from getting hacked...
Read more
Blogs

This will be the first execution related to the 1993 serial blasts, in which over 250 people were killed.
Read more
Lifestyle

Guess Who is the brand ambassador of Kerala Ayurveda?? Kerala’s Ayurveda, an ancient system of health care which is famous for its holistic effect on...
Read more
Bollywood

Twinkle Khanna aka MrsFunnyBones hits the headlines quite often. Almost all of the time, this is for good reasons; sometimes for her sarcasm &...
Read more
Bollywood

Filmmaker Farah Khan, whose films are marked by dollops of dance, songs and melodrama, says she may make an experimental film like Margarita With...
Read more
Load more
KHURKI

Happy Birthday to The Nightingale of India...
Read more
Flicks

Supergirl is an upcoming American television series developed by writer/producers Greg Berlan, Ali Adler and Andrew Kreisberg set to air on CBS. It is based on the...
Read more