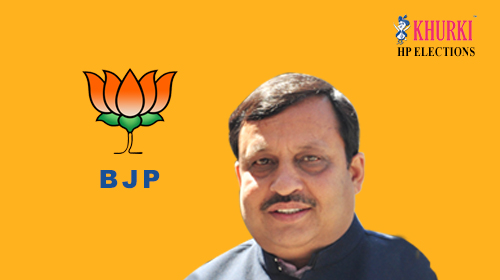 Virender Kanwar is the Kutlehar MLA. He is associated with Bharatiya Janata Party. He is son of late Shri Jagjit Singh. He was born at village Deev, Tehsil Nadaun, Distt. Hamirpur on 29th January 1964. He is BA LL.B and has done a Diploma in Pharmacy. He is married to Smt. Meena Kumari.

Kutlehar State, covering an area of 482 km, was one of the Princely states of India. It was reigned by Rana Amrat Pal until its occupation by Nepal from 1803 to 1815. After the annexation by Punjab in 1825, the state ceased to exist. The territory was then annexed by the British Raj and reduced to an estate (jagir). Kutlehar Estate acceded to India in 1957. Its main town was Bangana, in present day Una district. Currently, the area of the former estate is part of the state.

Elected to State Legislative Assembly in 2003; re-elected in December 2007; remained member, Public Accounts & Human Development Committees before being appointed as Chief Parliamentary Secretary in 2009. (Attached with Public Works Minister and Education Minister.) He was elected as MLA from this Vidhan Sabha seat in the elections held in 2012. He won by a margin of 1692 votes. Ram Dass of Indian National Congress was the trailing candidate.

Shimla, Aug 17: The Mandi administration evacuated five villages near Kotrupi as after a massive landslide on August 13 a lake has been formed...
Read more
Himachal

Shimla, Oct 25: Veteran Congress leader Vidya Stokes on Wednesday filed a petition in the Himachal Pradesh High Court against the rejection of her...
Read more
Himachal

Twelve Signs Your Roommate Is For Keeps!

When you have to move into a flat or PG with a roommate who's a complete stranger, many of us end up hating each other...
Read more
Bollywood

Twinkle Khanna looks very calm and refreshed after her much-hyped vacation. The peace within is very evident from the recent cover shoot posted by Aishwarya...
Read more