What? KRK To File Case Against Mandana Karimi! 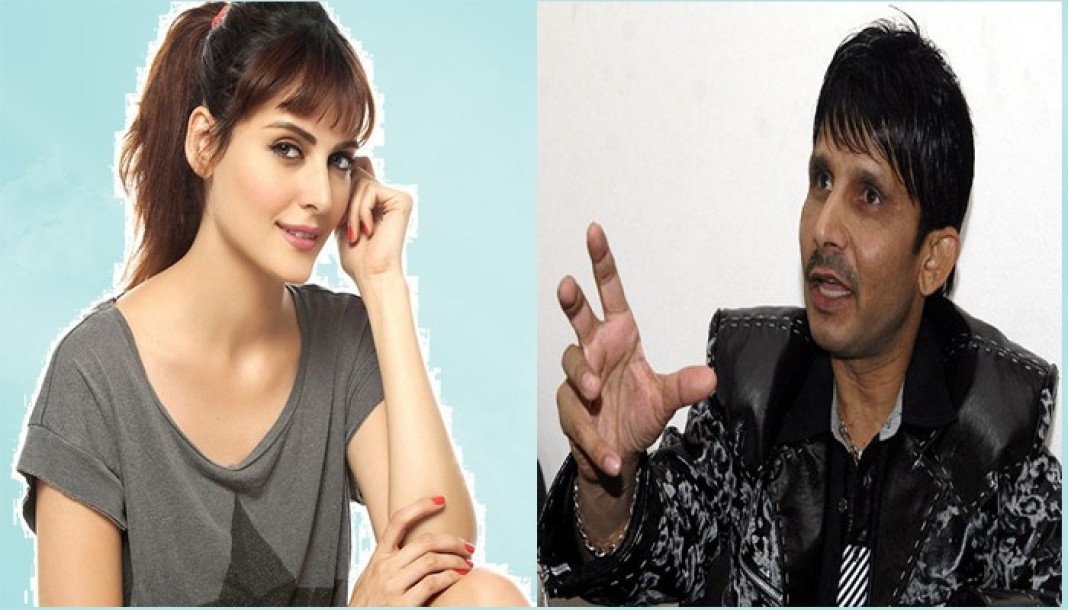 Who is a self-proclaimed Twitter star but anointed as the most chut**ya actor of Bollywood industry?

Another hint: His basic work is to tweet on celebrities and politicians insulting them and trying his best to gain publicity with his reviews.

Yes, you have guessed it right! It is KRK Kamaal R Khan!

And this time he has gone from being worse to worst. No kidding, check out his tweet from Thursday:

Mandana you come out of #BiggBoss9 n pay me royalty to use my name n if you will not pay then I file a case against you.

In Wednesday night episode, Mandana was seen crying and totally heartbroken after the House inmates badmouthed her. She said she would teach a lesson to all those co-contestants who had spoken ill of her.

Can’t form a connection? Let’s just stop beating around the bush and come straight to the point.

OMG, is KRK referring to the word moron that Mandana used in her argument with Prince??

No actually what KRK meant was when Mandana was thanking Bigg Boss for showing real faces of co-contestants to her, she said “KAMAAL kar diya Bigg Boss apne…aur dikhao…aur pyaar dikhao”.

And KRK thinks he has a copyright over the word “Kamaal” and wants Mandana to pay him royalty for using his name. Lol!

Also read: All You Wanted To Know About Beautiful Mandana Karimi!

We all know Mandana has been creating controversies since Day 1 and her dislike for Prince has been more than evident. So now, with Rishabh going  against Prince, Mandana is likely to befriend Rishabh: Kyun ki wo kehte hain na dushman ka dushman dost.

And this is what KRK tried to say in his next tweet on Mandana Karimi:

Mandana is fan of Rishab now because he is giving Zabardast reply to prince, instead he has become more loud than Prince. #BiggBoss9

Seems like KRK is a die-hard fan of Bigg Boss!! He is yet to come out of his short stint in the House in Season 3 in 2009.

The big fight for Bigg Boss 9 title has finally come to an end! And even as Prince, Rishabh, Mandana and Rochelle played smart to reach the finals,...
Read more
Blogs

Kishwer Wants Prince Narula to Win BB9! And You?

We all know that Prince Narula, Rishabh Sinha, Mandana Karimi and Rochelle Rao are the clear frontrunners for the title of Bigg Boss 9. To...
Read more
Entertainment

With so many surprise elements and the twist and turns on the show, Bigg Boss 9 is actually grabbing eyeballs these days. Various tasks have...
Read more
Entertainment

Put On Your Party Shoes And Get Ready To Go Sarfira

It's the time to disco...
Read more
Lifestyle

Have A Spouse Dealing With Depression? Remember These Points…

Sometimes even the smallest problems become highly complicated when there is a partner dealing with a partner suffering from depression. In this case, it...
Read more
Blogs

Why is Hazel Keech the most-searched on Net?
Read more
Load more
KHURKI

Charles Spencer Chaplin aka Charlie Chaplin as we all know is one of the greatest names in the world of cinema and entertainment. A...
Read more
Bollywood

Jhalak Dikhhla Jaa Reloaded is all set to go on-air on 11th July and the talented dancer is planning to set the stage on fire. But...
Read more