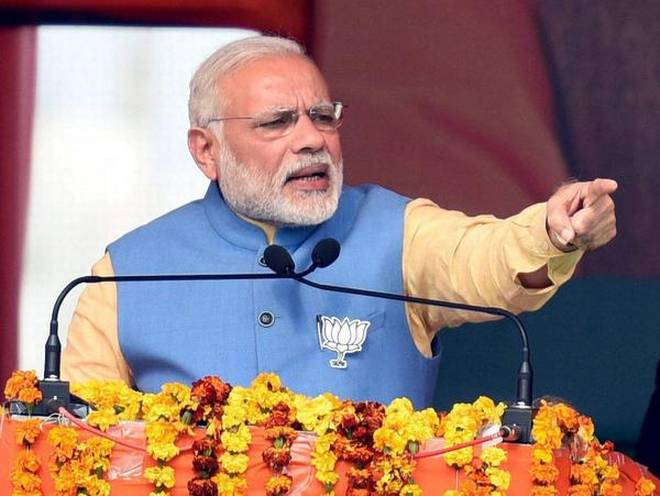 Bilaspur, Oct 3: Prime Minister Narendra Modi on Tuesday took a swipe at Himachal Pradesh Chief Minister Virbhadra Singh by asking the people of the State to throw out the Congress government which is “on bail.”

Kicking off the BJP’s election campaign in Himachal Pradesh, he said the Congress leadership was wary of taking action against the Chief Minister as it was also sailing in the same boat.

He was addressing the “Abhar rally” of the BJP after laying the foundation for an All India Institute of Medical Sciences (AIIMS), Kothipura in Bilaspur district; IIIT in Haroli constituency in Una and dedicating the Steel Processing Plant at Kandrori in Kangra district online from the Water Sports Complex on the banks of Gobind Sagar Dam.

Asserting that no case of corruption has surfaced after the NDA government came to power, Mr. Modi said that till 2014, newspapers were full of reports about scams, be it Coalgate or 2G scam, and asked the people of Himachal to “throw out the government on bail”.

The Himachal BJP was fully geared up to take up the reins of power and fulfil the dreams of the people to provide a clean and efficient government, Mr. Modi said.

The NDA government believes in development and currently 13 major projects involving an investment of ₹15,000 crore are under implementation, which would accelerate economic activity and generate employment, he said.

The 68-member Himachal Assembly is likely to go to polls in November.

Shimla, July 29: A doctor from Una, Deeprekha Rajpoot, has made it to the final of the Haut Monde Mrs India 2017 contest. Coming...
Read more
Himachal

While everyone, Salman Khan most nervously, waits with bated breath for the May 6 verdict of the Sessions Court conducting the 2002 hit-and-run trial against...
Read more