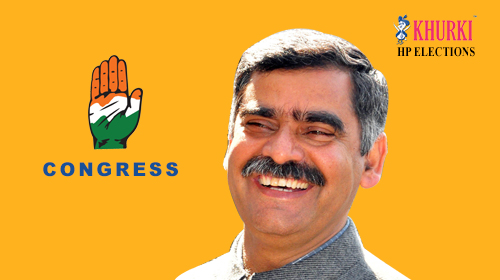 Sanjay Rattan is MLA from Jwalamukhi. He is associated with Indian National Congress. He is son of Shri Sushil Chand Rattan (Freedom fighter). He was born on 10th March 1963 at Garli, Distt. Kangra. He has studied Law. He is married to Smt. Ritu Rattan.

Jwalamukhi is a nagar parishad in Kangra district. As per the 2001 Census, Jwalamukhi had a population of 4931. Males constitute 52% of the population and females 48%. Jwalamukhi is a famous temple to the goddess Jwalamukhi, the deity of flaming mouth. The shrine is regarded as a Maha Shakti Peetham.

He won by a margin of 4025 votes. Ramesh Chand of Bharatiya Janata Party was the trailing candidate.

Shimla April, 20; An alert has been sounded in Kullu and Mandi as glaciers have started melting rapidly and the water level of the...
Read more
Himachal

Kullu, Oct 27: Forced to jump into the political arena on the sudden demise of his father and former Ayurveda Minister Karan Singh in...
Read more
Himachal

Shimla, Aug 3: Amid the India-China standoff in Sikkim over Doka La, heightened Chinese activity has been reported across the border in Himachal Pradesh...
Read more
Load more
KHURKI

And, Here Is Diwali Bonanza: Office Version Of PKP Speech!

Have a happy and fun-filled Diwali!
Read more
Blogs

Why Swachh Bharat Abhiyan Failed? IIT-ians Tell You Why In This Video!

Swachh Bharat Abhiyan was launched with a vision to keep India clean. People find it very convenient to throw garbage here, there, everywhere. But this...
Read more
Go to mobile version