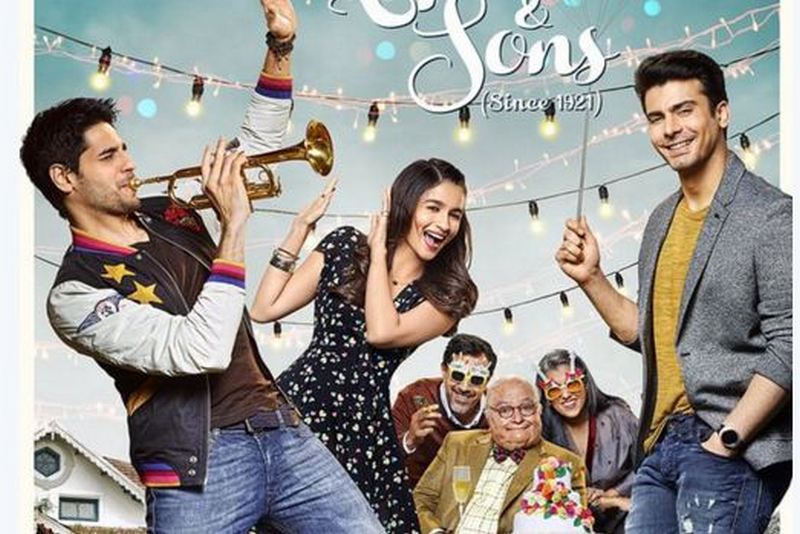 The countdown to the Karan Johar’s next production Kapoor & Sons has begun. First look, poster, motion poster….things are tumbling out one by one.

Soon after Rishi Kapoor shared the first look of his in the movie with his fans, the poster has been released. The trio of Alia Bhatt, Sidharth Malhotra and Fawad Khan has got us extremely happy because they look to be in a jovial mood holding different props.

Karan Johar producer of the film shared the poster on Twitter on February 2nd:

On the other side, Bollywood actor Sidharth Malhotra shared the motion poster of the film on his Instagram account. Check this out:

Keep up with the kapoors #kapoorandsons #birthday #party

Kapoor & Sons poster looks so lively with all the characters in a celebratory mood. Looks like they are celebrating ‘Daadu’ Rishi Kapoor’s birthday!

This family film is all about two brothers from a dysfunctional family, with one of them being gay. Rishi Kapoor will be seen in an almost unrecognizable look. See if you can recognise him in the pic that he shared on Twitter:

Kapoor & Sons. First look of mine in the film. Others to follow. Await!! pic.twitter.com/QpRnhtrvCp

The film has been directed by Shakun Batra and besides Rishi Kapoor and the young trio, it also has Ratna Pathak Shah. The film will hit the screens on March 18th.

The trailer sure is promising...
Read more
Lifestyle

What All You Can Do When Your Husband Works Abroad?

No one really wants to stay away from ones spouse after marriage but when your husband works abroad, turn it into a positive situation. The situation...
Read more
Blogs

Girls can be irritating! Being one myself, I can say this with all the objectivity possible. A lot of observation, questioning and poking around has gone...
Read more
Blogs

Prime Minister Narendra Modi celebrated the first anniversary of his spectacular victory in the national elections last year with what was a 53-minute address...
Read more