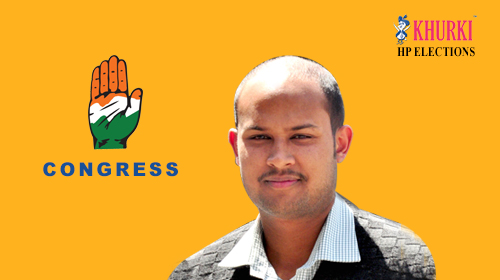 Yadvinder Goma is the Jaisinghpur MLA. He is associated with Indian National Congress. He is son of Shri Milkhi Ram Goma (Ex. MLA, Himachal Vidhan Sabha). He was born on 4th February 1986 at Panchrukhi, Distt. Kangra. He is B Tech. (Mechanical Engineering) & MBA; Engineer and Social worker.

Jaisinghpur is a Sub-Division in Kangra district of the state. There is only one tehsil under Sub-Division Jaisinghpur, which is situated at Jaisinghpur itself. The population of Jaisinghpur town is 1,273 and overall population of Jaisinghpur Sub-Division is 58,623. It was named after the Katoch king of Princely ordered state Kangra-Lambagraon, Maharaja Jai Singh. It is situated on the bank of river Beas. It is known for its “chaugan.” There are several notable temples in the town such as Janaki Nath temple, Radhey Krishan temple near Bus Adda, Laxmi Narayan temple, Baba Mani Ram Temple, Neel Kanth Mahadev Temple, Dhudu Mahadev Mandir, Guga temple (called Gangoti near Shitala Mata Mandir), Shitala Mata temple, a Dargah midtown popularly known as Baba Shah Mast Ali Dargah and a Gurdwara on Jaisinghpur-Lambagoan road. Shitala Mata temple is a famous temple of the town on Tinbar-Palampur road. Another famous temple is Jankinath temple.

Yadvinder Goma was general Secretary, Block Congress Jaisinghpur, 2009-2011. Then, he has been the Joint Secretary, Rajiv Gandhi Panchayati Raj Sangathan (Himachal) from 2010 till date. He has been the President of Youth Congress Jaisinghpur constituency from 2011 onwards. Yadvinder was elected to the State Legislative Assembly for the first time in 2012 at a very young age. He won by a margin of 9735 votes. Atma Ram of Bharatiya Janata Party was the trailing candidate.

Solan, Sep 18: With vehicular emissions emerging as the lead cause of air pollution in various industrial clusters, the State Pollution Control Board has...
Read more
Himachal

Shimla, June 15: The three main parties – the Congress, the BJP and the CPM- intensified their efforts to woo 91,000 voters, who will...
Read more
Himachal

Shimla, June 21: The National Green Tribunal has directed the state to formulate an action plan with regard to the entire state for collection...
Read more
Himachal

SHIMLA, March 24: Even as Assembly elections are round the corner, winning Bhoranj Assembly bypoll has become a challenge for the ruling Congress. Around 60...
Read more
Himachal

Are You A White Person?

Most colours in our world have some or the other emotions associated with them. If your wardrobe is full of whites, and if you have...
Read more