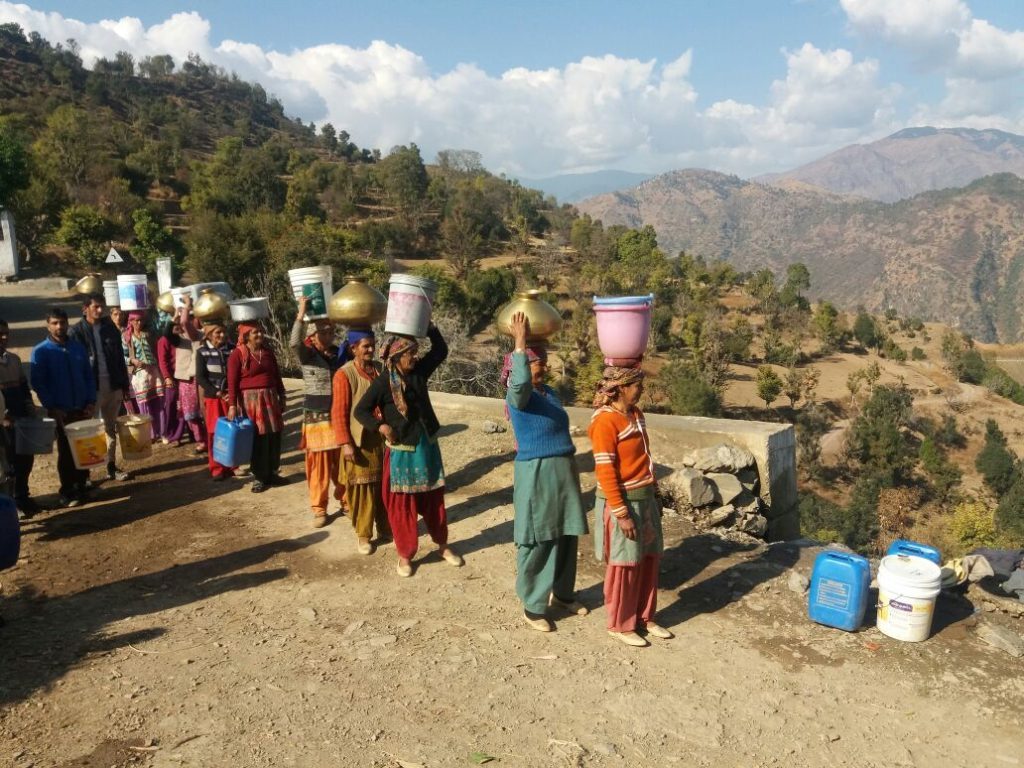 Shimla, June 5: Water crisis has remained the bane of Shimla residents for the past five years which assumed alarming proportions following the outbreak of jaundice due to the contamination of water. It was caused by mixing of sewage with water supply, forcing freezing of the Ashwani khud scheme in January 2016.

People protesting against water shortage took to the streets as supply was curtailed by 8 to 10 MLD, almost 25 per cent of the total supply. Water has emerged as a key issue in the Shimla Municipal Corporation polls slated for June 16 and the residents of areas fed by the Ashwani khud scheme are targeting the state government and the CPM for their water woes.

The SMC resorted to water supply on alternate days following the directions of the High Court which monitored the supply situation. Even now several colonies are getting inadequate supply of water and the “alternate day” supply schedule was not strictly adhered to.

Executed during the British rule, the Shimla water supply scheme was initially designed to cater to 30,000 people, but the population has increased to 2.10 lakh. The floating population of 70,000 during the summer months increased the demand and the drying up of perennial water sources aggravated the crisis.

The Rs 1,200-crore World Bank-funded Kol Dam water supply scheme, envisaging the supply of 65 MLD of water and providing a lasting solution to the problem, made slow progress and its execution is yet to commence even though the World Bank has given its nod. As elections are being held during the peak summer season, political parties and candidates are at the receiving end. “We will have to pay for the water crisis,” said a sitting councillor.

BJP MLA from Shimla (Urban) Suresh Bhardwaj said the people of Shimla were crying for water and the SMC had failed to provide water to them.

“The situation is so critical that many a time people took to roads protesting the crisis of water. Water is the main poll issue in the SMC elections and the BJP, if voted to power, will expedite the execution of the Kol Dam project, which is the permanent solution to the problem,” he added.

“Water comes for one hour after five days and we are planning to shift from here if the present condition persists,”rued Mala Devi, a resident of Chakkar.

“There was no problem of water for almost three-and-a-half years, but the outbreak of jaundice in January 2016 that claimed 18 lives was an eye-opener. To ensure that contaminated water is not supplied to the residents, the source was frozen,” said Deputy Mayor Tikender Panwar.

The SMC was facing the problem of lack of synergy among departments and after a lot of effort the pumping and distribution of water was transferred to the SMC in July 2016 and an integrated Greater Shimla water supply and sewerage system was put in place.

To cope with the shortage caused by the closure of the Ashwani khud scheme, the SMC faced a daunting task of augmenting the supply from other sources and 2,000 m of Giri pipeline was replaced at a cost of Rs 4 crore and plugging of leakages, replacement of pumps and pipelines which cost Rs 100 crore, ploughed 10 MLD water into the supply, Tikender said.

Another discrepancy that came to notice was that in place of 7.9 mm thick pipelines, 6.2 mm thick pipes were installed and during their physical verification, it was found that the thickness was 5.4 mm, he claimed. “The residents will have a round-the-clock water supply only after the Kol Dam scheme is commissioned,” he added.

Shimla April, 28: Modi mania virtually gripped the Queen of Hills as Prime Minister Narendra Modi, who has had a close association with Himachal,...
Read more
Himachal

In love with the song...
Read more
Blogs