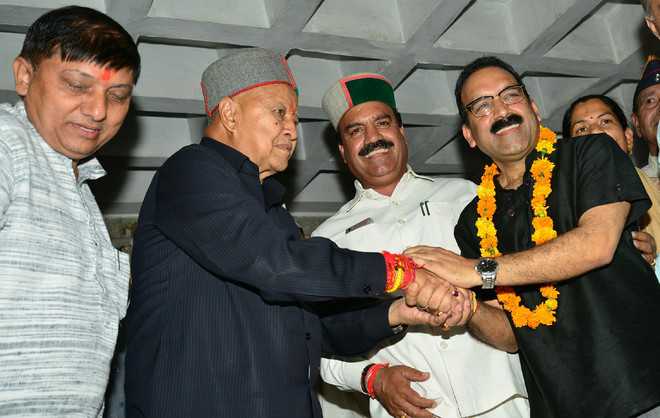 Shimla May 12: Chief Minister Virbhadra Singh said on Thursday that Congress leaders should not fight among themselves. He said the elections for the Municipal Corporation, Shimla, were postponed following complaints from different political parties regarding discrepancies in the voter list. He said once the electoral list would be amended, the election for the MC would be announced by the Election Commission.

The EC had ordered the fresh revision of voter list, he added.Earlier, Virbhadra Singh dedicated development projects of over Rs 40 crore in the district. He inaugurated the building of District Attorney, completed with an outlay of Rs 1.69 crore, and hostel of Government Polytechnic. He also inaugurated residential quarters of staff of the Community Health Centre at Tauni Devi, Primary Health Centre at Kot and Chauri.

Chief Minister Virbhadra Singh welcomed the sitting BJP state secretary into the party fold while addressing a gathering at Gandhi Chowk here today. Vinod Thakur, once considered a close confidant of former Chief Minister Prem Kumar Dhumal, along with his supporters, joined the Congress embarrassing the BJP leadership in the district.

The CM said Vinod would be given respect in the party. He said he never tried to poach any member of any party. Lambasting former Dhumal, he said Dhumal framed false cases against him and at both times he was acquitted.

SHIMLA March, 28; The Chaitra Navratri festival is being celebrated with full devotion and enthusiasm in Himachal Pradesh. Navratri is dedicated to Goddess Durga....
Read more
Elections

Shimla, Aug 9: Congress is in power in Himachal Pradesh and assembly elections are due within months in state. Chief minister Virbhadra Singh said that the victory of...
Read more
Load more
KHURKI

In love with Atif's voice are you?
Read more
Lifestyle

Artist Marina Abramovic was doing a live art performance in which she was spending one minute of silence with a stranger. Many people showed...
Read more