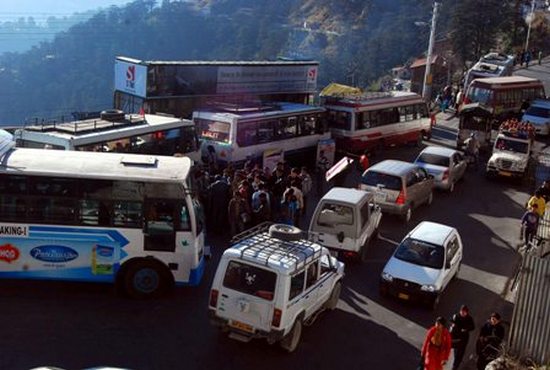 The Himachal Pradesh High Court today directed the state government and Shimla Municipal Corporation to file quarterly status reports on the citys traffic which is said to be chaotic. A division bench comprising Chief Justice Mansoor Ahmad Mir and Justice Sandeep Sharma passed the order on a petition filed by Dharam Pal Thakur, who had alleged the authorities had failed to diligently perform their duties, leading to chaos and haphazardness on the citys roads.

The court, which took up the petition as a Public Interest Litigation, directed the state government to file a status report on the implementation of Shimla Road Users and Pedestrians (Public Safety and Convenience) Act and furnish the list of permits granted by the authorities for plying of vehicles on sealed and restricted roads.

It also sought an affidavit on the mechanism put in place to check and deter “unnecessary” vehicles on sealed and restricted roads, whether CCTV cameras were installed at entry points and proper signals fixed.

It also asked authorities to report to it what steps have been undertaken to prevent unauthorized parking in and around Indira Gandhi Medical College, Kamla Nehru Hospital and Deen Dayal Upadhyay Hospital and what is the policy prevalent for manning HRTC taxis on sealed and restricted roads.

China steps up activities along Himachal Pradesh border in Kinnaur

Shimla, Oct 12: Two cement firms with plants in Himachal Pradesh on Thursday agreed to reduce their prices by Rs 5 per bag in...
Read more
Himachal

Shimla, Aug 31: The Congress reached out to its irate leader and Himachal Pradesh Chief Minister Virbhadra Singh who has said he will withdraw...
Read more
Load more
KHURKI

7 Things Girls Say To Their BFs And What They Really Mean!

Relationships can be tricky!! That being a fact, when we start one they tend to become all the more complex with time. Has it ever happened to...
Read more
Humour