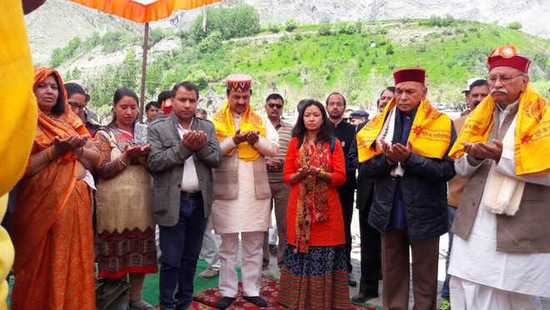 Shimla, June 13: Lahaul-Spiti will be developed as tourist destination and it will provide job opportunities to people, said Union Minister of State for Tourism and Civil Aviation (Independent charge) Mahesh Sharma on the occasion of Chandra-Bhaga Sangam Parv in the district on Monday.

The minister was in the district to attend Chandra-Bhaga Sangam Parv where he was accompanied by Haryana Chief Minister Manohar Lal Khattar, BJP MP Ramswaroop Sharma, former Chief Minister Prem Kumar Dhumal and other BJP leaders.

Addressing a gathering, he stated that Tandi Sangam would be developed for tourism purpose as per the demand of people and there was no dearth of funds to execute the project. The minister said the Centre had given Rs 200 crore for Himachal to develop tourism infrastructure but nothing had been done in this remote region.

He assured them that Buddhist circuit would be developed for tourism purpose and the Centre had approved Rs 250 crore to develop such circuits in various parts of India and Lahaul Spiti would be included in it soon.

He also asked the state government to send a DPR of this project.He said the Centre had approved Rs 100 crore to develop four museums in the state and assistance would be provided to promote tourism in this hilly state. Khattar assured the people of the district that the Haryana Government would provide help to develop ghat at Tandi Sangam, where the Chadra and Bhaga rivers meet.

Shimla, July 3: The Centre has declined the request of the state government to contribute funds in 90:10 ratio to the Dharamsala Smart City...
Read more
Himachal

A Kargil War Memorial Soon To Be Built In Himachal Pardesh

Shimla May, 11: It may well be the first war memorial of its kind, complete with an action scene from the Kargil battle, with...
Read more
Himachal

Indiscipline will not be tolerated warns CM Virbhadra Singh

EC to rope in Bollywood stars, sportspersons to boost voters in Himachal Pradesh

Shimla, Sep 20: The Election Commission in Himachal Pradesh will rope in Bollywood stars and sportspersons to boost the polling percentage in the forthcoming...
Read more
Load more
KHURKI