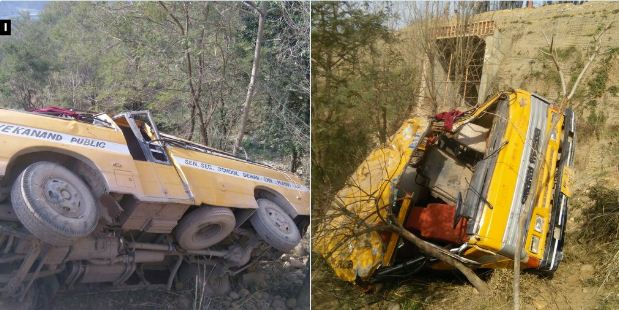 At least 25 school children were injured on Friday when their school bus skidded off the mountain road in Mandi district in Himachal Pradesh, police said. The mini bus was going to school when it skidded off the road in Dehar near Sundernagar town, Deputy Superintendent of Police Sanjeev Bhatia told IANS over phone. He said two students, who grievously injured, have been referred to a government hospital in Mandi town and others with minor injuries have been admitted in a civil hospital in Sundernagar.

The students were from Vivekanand Public School at Dehar. Eye witnesses told police that the bus driver probably lost control over the vehicle while negotiating a turn. The accident spot is some 100 km from the state capital.

Dept transplants trees to be axed for NH widening

Shimla, Sep 27: For a state that is the third in the country to start a Rs 1,000 per month social security pensions for...
Read more
Load more
KHURKI

Please avoid these 16 words – when in a foreign country. Now that summer vacations are here, everyone is planning a trip to their favourite...
Read more
Flicks