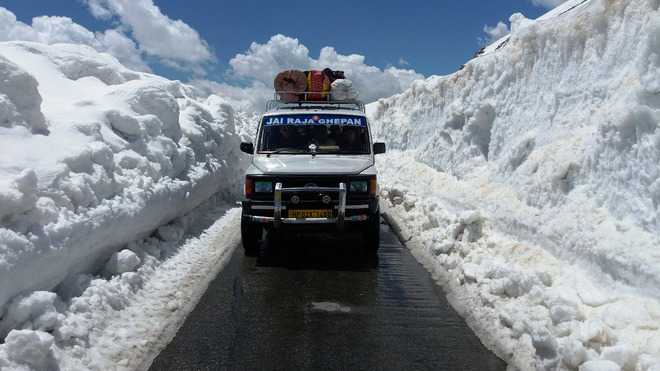 Shimla April, 29: After the opening of the 13,050-ft-high Rohtang Pass for all vehicles today, the 474 km-long Manali-Leh highway will open to traffic by May 25 as the Border Roads Organisation (BRO) is now putting all efforts to clear snow from the Keylong-Sarchu highway. Mohan Lal, Chief Engineer, Project Deepak of BRO, today visited the Rohtang Pass and took stock of the progress of snow-clearance on the Manali-Sarchu highway. He applauded the officers and jawans engaged in the snow clearance, who opened the Manali-Keylong highway before the target.

The Chief Engineer discussed strategy to clear snow from the Keylong-Sarchu and Gramphu-Kaza (Spiti) road with the 38 Border Road Task Force. He said BRO jawans were moving towards the Baralacha Pass with a rapid speed and had cleared the road till 162-km beyond Patseo. The Tandi- Sansari road has already opened to vehicles.He said the BRO would continue to maintain the road to the Rohtang Pass even after the completion of the Rohtang tunnel. “The Kunzum Pass area has thick layers of snow. The Gramphu-Kaza road over the Kunzum Pass is expected to open by June end,” he said.

After snow clearance, the BRO will widen the roads and carry out maintenance works. The road is sinking at many places. The Chief Engineer said soon the entire 222-km-long Manali-Sarchu highway would be converted into double-lane road. The opening of the Rohtang Pass was not easy this year due to thick snow accumulation and inclement weather conditions. He said the region had experienced many avalanches and landslides recently posing a challenge to the jawans.

He said the road till the Rohtang Pass had been opened by the BRO. “Now it will be decided by the administration that whether tourists should be allowed to the area or not. There is still risk of avalanches and landslides and proper monitoring is essential to avoid any untoward incident,” he added. Meanwhile, goods carriers from Kullu have started ferrying fresh vegetables and other goods to the Lahaul valley which got road connectivity after a gap of four months.

Shimla The Himachal Pradesh Board of School Education (HPBOSE) has cancelled the Class 12 Physics and Computer Science papers in the state. Amidst theft...
Read more
Elections

Are we ready to shed those tears again?
Read more
Blogs